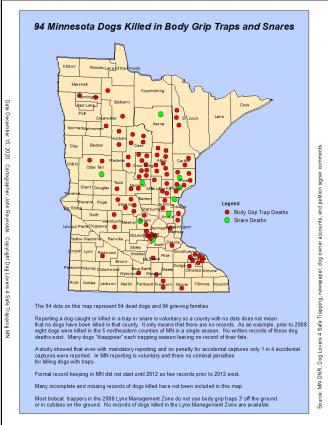 Pet owners should be aware that the trapping season for fishers, bobcats and pine martens starts Dec. 19, according to the founder of an organization that says certain methods of trapping in Minnesota remain dangerous for dogs.

“We’ve been trying to get changes in the way lethal body grip traps are used in Minnesota for the past nine legislative sessions,” Reynolds says. “We have records of more than 90 Minnesota dogs killed, but the true number is likely many times that.”

Reynolds is no stranger to both the trapping community and the devastation one feels from losing a pet to a trap. His own dog, Penni, was killed Dec. 17, 2011, in a ‘220 body-grip trap’ while he was setting fox traps about 50 yards away.

“Since that time, myself and many other grouse hunters have been forced to stop grouse hunting because of the unnecessary danger posed by meat-baited body grip traps set on the ground,” Reynolds says. “I’ve trapped 20-plus years in five different states and can say with absolute certainty that it is never necessary to risk killing a dog in order to trap.”

Reynolds reached out to WTIP to share his story following a recent report from the Gunflint Trail that involved a leg hold trap and a local resident’s pet dog becoming snared in its grip. Reynolds says the type of trapping that starts Dec. 19 can be far more dangerous than what is currently placed in the local woods.

To learn more about this topic, listen to the audio below.