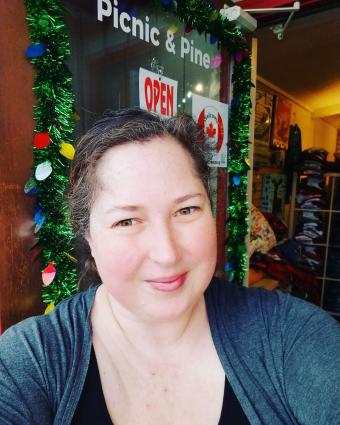 Anyone with ties to Grand Marais likely knows that a devasting fire destroyed three buildings in downtown Grand Marais on April 13.
WTIP Community Radio has been following the cleanup and the planning process for the future of those now-vacant lots downtown.

The Cook County/Grand Marais Economic Development Authority has been working with the business and building owners to look at possibilities for the now-vacant lots on Wisconsin Street. Recently, the EDA announced that it was seeking an individual or company that could work with the different businesses involved…not on sale of the lots, but to help bring together the various ideas that have been brought forward since the fire.

It is a challenging effort, involving the businesses lost to fire–Picnic and Pine, The Crooked Spoon Cafe and White Pine North, and other stakeholders.

The group, with EDA President Howard Hedstrom facilitating, has had some interesting discussions. There are still a lot of unknowns for the property and business owners, but Hedstrom stressed that at this time, none of the lots in question are for sale.

To hear from EDA’s Hedstrom about the search for a potential development partner visit that interview on the WTIP website: EDA working with businesses lost to fire on redevelopment plan

WTIP Community Radio also reached out to some of the business owners to learn more. Hear from Sara Hingos, co-owner with her husband, Nathan Hingos, of Crooked Spoon Cafe in this interview: Business owner impacted by Grand Marais fire shares update on plans moving forward

WTIP’s Rhonda Silence also spoke with Tyler Dean, who co-owns White Pine North with his wife, Jessica Dean. As with the other business owners, Tyler tells WTIP there are many details to be worked out. Learn what’s in the works in this interview: After-fire planning continues for Grand Marais businesses.

And this interview looks at Picnic and Pine, the gift store operated by Kelsey Kennedy. WTIP’s Rhonda Silence spoke with Kennedy, whose plans are perhaps most unknown at this time.