Rhonda Silence
Where are they now?

Woodcarver Bruce Futterer with a small sample of his work on display during a class at North House Folk School. Photo Rhonda Silence

In this segment of Where are they now?, WTIP’s Rhonda Silence speaks with Bruce Futterer, an educator and master woodcarver.

Futterer had a 41-year career as a teacher, mainly as a high school history teacher. He eventually became an administrator but did not enjoy that as much as teaching. He says it took him six years to get back in the classroom where he belonged. He is now retired and able to focus entirely on the art of wood carving.

WTIP asked Futterer how he got started woodcarving and he credits the late artist John Spellman, who was an art teacher at Cook County High School for a brief time. He also learned the craft from his brother-in-law Orton Tofte. He says he “carved in ignorance for 20 years,” when he took some classes.

He now teaches woodcarving classes himself. Rhonda Silence caught up with him during a break in a class at North House Folk School to learn more. See a video and hear an interview below. 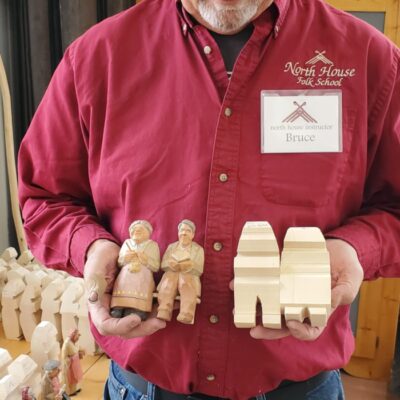 Futterer demonstrating the before and after of woodcarving. Photos Rhonda Silence

Many of Futterer's pieces reflect his Scandinavian heritage.

Some pieces adorn walls instead of shelves.

Enjoy this short video demonstration of Futterer at work, while being interviewed by WTIP!

WTIP Community Radio · Where Are They Now - Bruce Futterer, Woodcarver