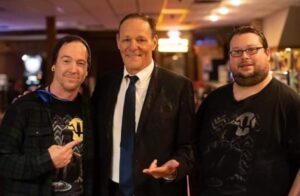 In this segment, WTIP’s Rhonda Silence speaks with Brandon Cole, now a Duluth resident working in the film industry. Cole’s voice may sound familiar to longtime listeners, he was once a WTIP volunteer radio host.

He went from radio to film and has been working on some interesting projects in Duluth. The photo above shows Brandon Cole (on the right) with colleague Wesley Johnson, a project writer, and actor Chris Mulkey on a recent set.

Cole had some exciting news to share with WTIP about the upcoming Catalyst Film Festival in Duluth taking place from September 29 to Sunday, October 3. He was encouraged by colleagues to submit a script to the festival’s script competition and he did, reviving a film idea he had worked on while in college. He has been invited to share his script at the festival. We learn more about that in the interview below.

You can also see Cole and some of the other participants talking about their work in this PACT-TV Duluth segment.