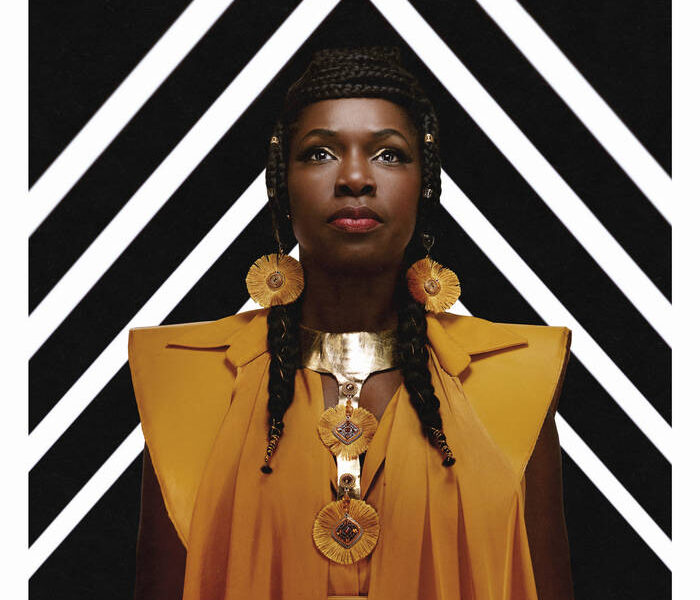 This weekend I listened to two new albums on repeat, one of which I had been hoping and praying would be released for the last 9 YEARS, nearly a decade of anticipation coming to fruition. But wouldn’t you know it, by this week it was the songs from the OTHER album, from a group that now to my chagrin I had never even listened to before, that was still stuck in my head and blew me away even more. That is the power of Ibibio Sound Machine, a sprawling band from the UK with African roots and an unbelievable sound. Their latest album, their fourth, is called Electricity and for the most part is purely that.

The name of the band comes from the language spoken by the lead singer, Eno Williams, who will often go between English and Ibibio – a language from Nigeria, her mother’s homeland and where she spent most of her childhood. Her vocals sort of ride the line between singings and rapping but they inject so much power and energy into the song with every syllable. The Sound Machine part is immediately apparent the moment you take a listen. The group mixes complex African rhythms with analog synths constantly whirring and growing, as well as a full BRASS section, adding brightness to the whole thing on top of some already stellar bass and guitar.

There’s something musically magical going on here, that is super interesting from a composition angle, and one song in particular here exemplifies it the most. The intro song Protection from Evil has left me totally fascinated and obsessed. This song is almost 90% one note. One root chord with no movement, that’s it. While this could be abrasive to some, I find it’s deliciously subversive to all Western music. It’s repeated for 4 minutes straight. But the four on the floor beat is so strong, the synths getting weirder and wilder, building continually and linearly, and Williams vocals so compelling and commanding that even if it is in a language you are not familiar with you can’t help but connect your heart and soul to the beat of this song – and then of course, it all explodes in catharsis.

That’s the kind of experience Ibibio Sound Machine brings to the table. Electricity is an electric album with plenty of songs that make doing anything but getting up and dancing and grooving simply not an option, however there are still a few mellower songs on it that don’t quite match the album’s theme or stratospheric heights the band shows its able to reach, I almost wish they went one step further and went completely mad on this album, wall-to-wall high-energy heavy hitters. Pure electricity. That said this group has rocketed to the top of my must-see-live list, their music videos are fantastic, and their outfits while performing are stellar. Overall this record is one huge afro-futuristic funk party that I strongly recommend.