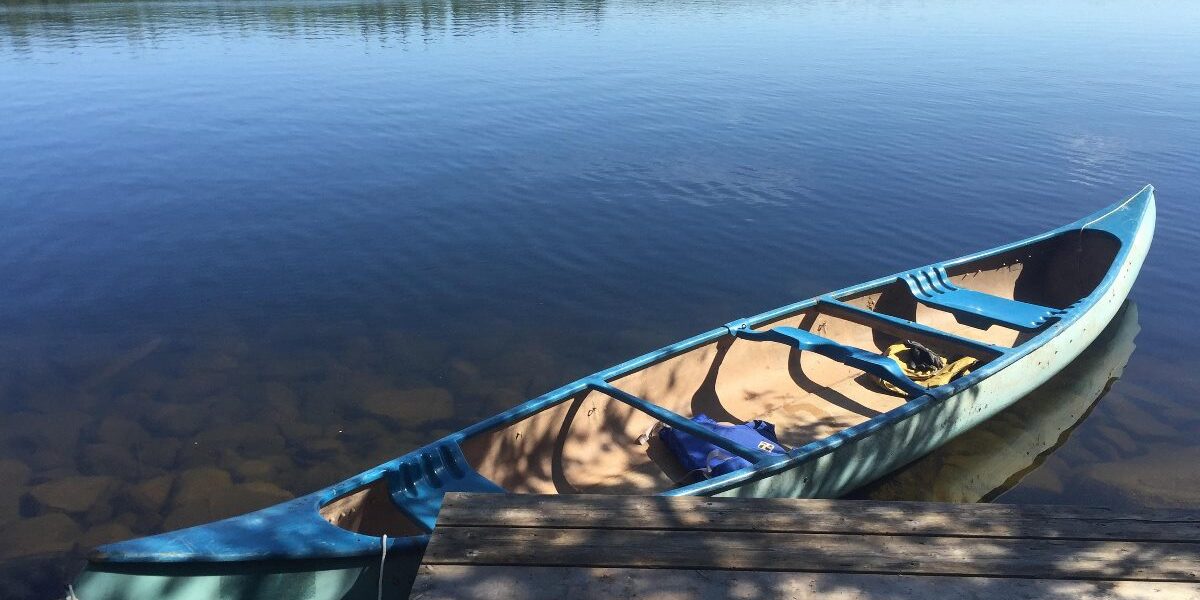 Our lush summer continues on the Gunflint Trail. We have had abundant rain — with an accompanying insect population boom. That’s a big benefit to all plants, birds, animals and fish, so we humans must endure the insect swarms. It appears the black fly season has ended — or paused — but it’s still a big year for mosquitoes. It’s been so buggy that I’ve been using a head net for the first time in about 10 years. When I walked through the woods to get to the lake yesterday, I put gloves on too so I had total coverage. I felt slightly ridiculous fully suited like that, but since nobody else is around to look, who cares? And once I’m on the water, most bug issues become just one more trouble, and then, along with most of my other troubles, they disappear for a time. I can always pick them up again when I come back to shore.

We’ve had some beautiful afternoons on the water lately, stalking that elusive lake trout from our old blue canoe, or “the Banoe,” as the younger daughter called it when she was little. This lovely vessel came to us from Lars’ family, who paddled it into the Boundary Waters many times. Lars used to take it on solo canoe trips too, which is impressive because it’s a bit of a monster, weight-wise. It’s a great fishing canoe with a nice flat bottom, wide of beam. It’s a hand-laid fiberglass canoe, built by a Minnesotan boatbuilder named Bernie Beck sometime in the late 1950s. People have asked us about it if they happened to see it on top of our car at a gas station. A few folks recognized it as one of Bernie’s canoes, which was totally delightful. I think I’ve only ever seen one other canoe like it, on top of a friendly stranger’s car. I’ve searched online to find out more about Bernie, but I’ve been unable to find out anything at all about him.

With these canoes, I’ve been steadily working on my stern paddling technique for about 36 years and I think I’m finally making some progress. There’s been a steady breeze lately that makes it a challenge to keep the Blue Canoe more or less in one place if the fisherman wants to jig. Or I try to paddle like a trolling motor by keeping a steady speed in one heading. One day last week we were floating around, slowly moving downwind as Lars fished. I was aiming the boat to some north-facing cliffs so I could see the peculiar bright-green lichen or moss that grows there. As we lazily made our way down the lake, I heard a commotion up on the palisade, at the cliff where I have seen young ravens learn to fly. There was a tremendous squawking and once again I witnessed two ravens become four; then three become six as the western sun doubled their shadows on the cliff face. I have read that ravens are one of the few birds that play in the air. I felt a really kinship with the ravens that day as I paddled and played with the canoe, the water and the wind, my paddle like the ravens’ wings, but I was carving and pulling and pushing the water instead of wind. Suddenly there was a bigger burst of cawing and then one, two, three turkey vultures glided into view and it became harder to keep count, with so many birds and their shadows flying around. The manic squawking of the ravens continued. The vultures kept patiently circling, circling, then landing in some kind of shallow cave on the cliff before flying up again. This went on for a bit then they gradually all disappeared west over the crest of the cliff.

By now Lars and I and the Blue Canoe were closer to the lakeshore and heard a funny squeaking sound that seemed to be coming from inside a beaver lodge, so we paddled over to check that out. We floated nearer, silent, parked by a downed tree sticking out from shore by the lodge. Oh, I wish I had recorded those sounds. I think there were two beavers squeaking/mumbling/whining at each other and making the fastest gnawing noises I’ve ever heard. I mean they were chewing like crazy! We still couldn’t see them; the cedar trees are so thick there. But we could hear them loud as day. It was so entertaining. They carried on for quite a while like we weren’t even there, but the sun was sinking, our stomachs were grumbling, and it was time for us to head home.

It is with delight and gratitude that I can say that today marks my one-year anniversary writing and recording Trail Time for WTIP. Thank you, friends, listeners and readers, for your support and encouragement. A special thanks to those who allowed me to share their stories, to Mike Valentini, who made it happen and to CJ, for making me sound smarter than I am.