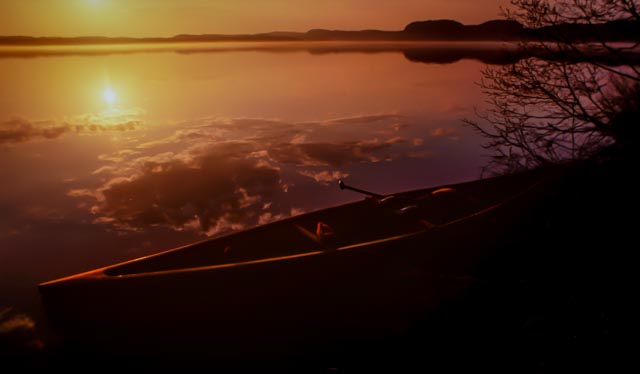 I am continually grateful for the lushness of this spring and summer after last summer’s drought and forest fire threat. It’s been a wonderful season for wildflower lovers like myself. First, of course, was the tiny flower of the hazel, then the elderberry bushes bloomed; and before the chokecherries blossomed the pin cherries burst forth in abundance. The pin cherries were absolutely luxurious with flowers; the trees formed mounds of delicate white blossoms rising up among the conifers, maples and birch. With such a bountiful spring, I keep asking myself, “Was there really snow here just a few weeks ago?” It’s hard to believe there was snow in the ditches along the Gunflint Trail on May 28, less than a month ago, but there was! I saw it. I’ve tried to shake off memories of winter  by soaking in the sun and swimming in the lake —  in 62 degrees water! But there’s this ritual I do every year that banishes my memories of the cold weather and rings in the fresh new spring: I head to one of my favorite trees — a wild apple — and shake the branches so the spent blossoms rain down all over and around me, the pale pink petals falling on the tall grass and raspberry bushes. I revel in the beauty of spring.

One of the earliest flowers is the marsh marigold with its deep yellow blossoms glowing from wetlands areas. And right now the small white woodland wildflowers are blooming, too. I’ve spotted wood anemones, Labrador tea, and bunchberry blossoms. Yesterday we admired a bluebird lily, its delicate yellow flower nodding toward its large green leaves. Open areas are sprinkled with strawberry blossoms, orange hawkweed and buttercups, adding bright notes among the grass and sedges. If we continue to get regular rain, it looks like it might be a good year for raspberries.

Each spring and summer, I have to relearn many names of flowering plants. I have a favorite book that helps me identify them (again). It’s Wildflowers of the Boundary Waters; Hiking Through the Seasons by Betty Vos Hemstad. It is arranged in colors and seasons and shows plants in their different stages. It’s a great guide to the wildflowers in our area. If you’re interested, limited quantities of the book are available at the Chik Wauk Museum gift shop on the Gunflint Trail, and in town at Drury Lane books and Lake Superior Trading Post. And speaking of Chik Wauk, I am happy to report that the high water has receded enough for the Nature Center, Museum and Gift Shop to now be open for the season at 28 Moose Pond Drive on the Gunflint Trail.

We are having such perfect summer weather right now and it is so very welcome after our long cold spring, followed by this week’s 100-degree heat and swarms of mosquitoes and black flies.

Before the hot weather hit, three of us took my cedar canoe out for a paddle. Lars and I had a guest with us that had only ever seen a moose from a distance, so we headed to a spot where we’ve seen them before. The day was fine: partly cloudy with a light wind, a little bit cool. We had our bug nets ready in case we were overcome by a clouds of insects, but we didn’t need the protection of netting that day.

It is always good to be in a canoe and that day it was simply exhilarating paddling into the wind with the sunlight sparkling on the water in front of us. As we paddled along, we could see disturbed areas of foliage where moose had pulled up water lilies to eat, leaving the roots floating. We passed a big swath of Bog Laurel in lovely pink bloom and paddled past some beaver lodges. As we went by a lodge, a beaver poked its nose out of the water a few yards in front of the canoe, then it dived down a split second later, moving too fast to slap its tail.

At one point we were floating peacefully in a quiet bay, watching a flock of Cedar Waxwings perched in a dead tree. They seemed to take turns, flying out one by one, snatching insects out of the air and then quickly returning to the tree. We were heading back toward the main body of water when Lars whispered, “What is that, straight ahead of us.” I said, “A rock.” “No! Look further away.” “A dead tree?” “No, no! Across the lake!” “Ah, that would be a moose,” I said. Larry and I have been paddling canoe together for over thirty years. I know the drill for watching wildlife: I sat quietly in the bow and didn’t move my paddle. Lars never took his paddle out of the water; he just kept moving it gently in the water to keep the canoe pointing at the moose. Our theory is that straight on, we don’t pose much of a profile to the moose, and might not spook it so easily. As luck had it, we were downwind from the moose, so we had that going for us. We floated there peacefully and silently and watched a yearling moose move out of the woods and enter the water, stepping high, folding and unfolding its impossibly long legs, its ears flapping the insects away. The young moose fed on water plants, then looked up and held still, focusing its attention down the lake. It appeared to be looking at something out of our view. We then headed around a little point to our right and then heard a great splashing behind some large boulders. As we passed the rocks, I saw what the first moose had been looking at: a second moose, this one bigger, sleeker and healthier-looking. It moved quickly out of the water with giant strides and faded into the woods. I did not see a calf, but we kept our distance so we wouldn’t startle them. We picked up our paddles to head back and then I stopped paddling and pointed my paddle straight ahead: my silent signal that I had spotted a third moose, this one much bigger, and moving more boldly toward us than the other two. We thought it might be a young bull moose, thought I didn’t see any antlers. He stretched up, craning his neck high above his shoulders, staring at us, his nostrils dilating as he tried to catch our scent. Someone in the canoe then coughed — I won’t name any names here — and we watched the third moose melt into the woods. It never fails to amaze me how quickly such large animals can disappear into the trees. We pointed the canoe back down the lake, this time with the wind at our backs, cruising along, paddling back to the landing, making our way home after our three-moose day on the Gunflint Trail.