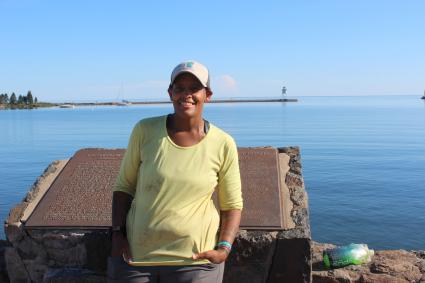 Last week, WTIP shared news about Black Lives Matter signs on the Gunflint Trail and elsewhere in the county being vandalized.

After reporting on this story, WTIP’s Joe Friedrichs wanted to see how this energy would impact the ongoing rallies held in downtown Grand Marais each Friday afternoon. The rallies started just days after the May 25 death of George Floyd in Minneapolis, a black man who was killed at the hands of the Minneapolis Police Department. On July 17, the eighth such rally was held in Grand Marais, a weeks-long stretch of consecutive events held in recognition of Floyd’s death and the Black Lives Matter movement.

Although at the time the two stories seemed mostly unconnected, Friedrichs said before the rally that for the past two weeks he’s been emailing with a woman from Atlanta, Georgia. Her name is Crystal Gail Welcome. She’s spending most of the summer walking the entire 310 miles of the Superior Hiking Trail. Welcome, a black woman from the Deep South, is doing this to raise awareness for social change following the death of George Floyd, but also to encourage other people of color to get outdoors and enjoy what Mother Nature has to offer.

Welcome happened to be in Grand Marais July 17 on the day of the most recent rally in support of the Black Lives Matter movement. A local resident introduced her to Friedrichs during the rally. You can hear their entire conversation by clicking here.

The audio below is a feature produced from their conversation and the rally in downtown Grand Marais July 17.