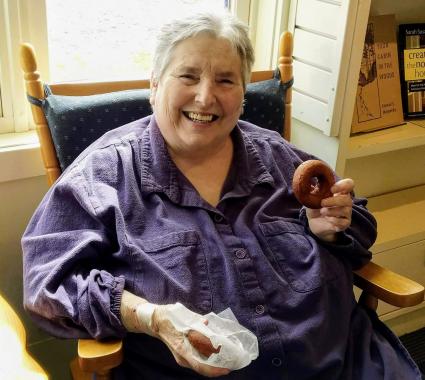 Author and community advocate Joan Drury will be missed

Joan Drury, award-winning author, patron of the arts, and friend to many on the North Shore, passed away Nov. 9 at North Shore Health in Grand Marais. She leaves behind an amazing legacy.

And it will come as no surprise to her friends that Joan herself wrote the obituary, with final touches made by her daughter, Kelly Kager.

Joan lived a life of advocacy for fellow authors, including her role as the publisher and chief editor of Spinsters Ink for eight years. During her tenure, the company published about 40 books, including 26 award-winning works.

From the metro area to the North Shore, Joan helped writers and eventually co-created Norcroft: A Writing Retreat for Women at her Lutsen home. Her daughter, Kelly, said she had a “small library” of the many books that were written in part at Norcroft workshops by attendees.

Joan was also an avid writer and she authored six books, earning numerous awards. Her Tyler Jones mystery trilogy, with its feminist lesbian writer protagonist, was set on the rugged North Shore.

Joan loved theater and she was delighted that her son, Kevin, took to the stage in many Grand Marais Playhouse productions. She was also involved in the Grand Marais Shakespeare Theater and Black Iris production, which produced The Vagina Monologues, not once, but twice. Friends who had never thought of acting took part, thanks to Joan’s encouragement.

The list of contributions made by Joan to the community is long, from donations to the school and library for books and programming or for the purchase of hurdles for the track team to a major affordable housing project in Lutsen.

One of her greatest legacies is the small building at the end of Wisconsin Street, at the edge of the Lake Superior shoreline, Drury Lane Books. The little bookstore is a favorite spot for book lovers of all ages.

According to the bookstore’s Facebook page, it was Joan’s wish and the wish of her children that Drury Lane Books stay open. Although saddened by the loss of the store’s founder, bookstore staff say they will continue to run her bookstore and offer the space and curation of books that Joan founded in 2002.

WTIP’s Rhonda Silence talks with Gwen Danfelt, the manager of Drury Lane Books, about Joan’s legacy and the future of the bookstore.

She was preceded in death by her son Scooter (Todd) Kager in 2017; her parents Edward and Barbara Drury; her sister Gail Fuad; her brother John; and her beloved cat Gertie who died on Thursday, November 5, 2020.

She is survived by her children Kelly and Kevin Kager, granddaughters Mirranda and Allie Kager, great grand-daughter Brooklynn Erickson, her sister Marta Drury and many other nieces and nephews.

Joan grew up in Richfield, Minnesota and worked in the family business (garbage hauling) for about 13 years after her high school graduation both for the garbage company All-State Disposal founded by her and her ex-husband, Bud Kager and for the company founded by her father, Woodlake Sanitary Service (later Browning Ferris Industries).

She had three children: Kelly, Scooter (Todd), and Kevin. In her 30s, Drury went back to the University of Minnesota and graduated Phi Beta Kappa with a major in Women’s Studies and a minor in Minority Studies.

Joan worked for the Loft in Minneapolis for many years.

Her religion, if any, was feminism and she was an activist for most of her adult life. She owned, was the publisher and chief editor of a feminist publishing company, Spinsters Ink, in Minnesota for eight years. During the period, the company published about 40 books, 26 of which earned awards.

She created and ran, with her friend Marilyn Crawford, a women’s foundation, Harmony Women’s Fund, which funded over 100 women’s non-profit organizations in the state of Minnesota and created the National Lesbian Writers Awards which aided lesbian writers financially to focus on their writing.

Harmony also created Norcroft: A Writing Retreat for Women; which, over the course of 14 years, supported over 600 women in one- to four-week residencies to focus, with no interruptions or demands on their time or pocketbooks, on their own writing. Joan had a small library with many, many books written at least in part by Norcroft attendees that were sent to her by their authors.

Both her daughter, Kelly Kager, and Kay Grindland were operations managers for Norcroft.

In 2002, she bought a small building on the shoreline of Lake Superior in Grand Marais and created and developed Drury Lane books which has thrived into the present day with a devoted and loyal following of customers. She was aided in this endeavor by store managers Lee Stewart and Gwen Danfelt, without whom it would not have been possible

Over the course of her life, Joan also wrote six books of her own, four of which were published and earned a total of 11 awards.

She loved books and spent much of her time with words—talking, reading, writing, reading to older folks at the local Care Center in Grand Marais, playing Scrabble, attending book groups.

She also loved gardens and had a glorious garden she helped design at her former home in Lutsen where she lived for many years.

In addition to Lutsen, Joan resided in Richfield; Fridley, Minnesota; Dalbo, Minnesota; Loretto, Minnesota; Bloomington, Minneapolis, Olathe, Kansas, San Francisco, California; and Duluth. She loved everywhere she lived, but always came back to the North Shore of Lake Superior where she spent many summers as a child with her mother, and finally moved there full-time when she was 59, although she had spent part of every year there for the previous ten years.

At the Playhouse, she was instrumental in creating the Grand Marais Shakespeare Theatre and Black Iris productions which produced The Vagina Monologues twice as well as other political productions.

She also participated in many fundraising efforts for various non-profit organizations in the area, and established Woodland Foothills, an affordable housing project, and contributed funding to many non-profit and for-profit companies/organizations over the years. She loved her community and thought it was the BEST place to live.

Joan considered her most valuable talent to be that of friendship, the relationship she considered to be the most important. She felt she was rewarded with many loving and supportive friends over the years and attempted to be the same. She was also extraordinarily proud of and devoted to her children, and she felt she was blessed in being able to call them friends.

A memorial service will be planned for the late spring/early summer.

If you desire to give a donation in her name, please do so to the Violence Prevention Center in Grand Marais or Arrowhead Animal Rescue—Cook County.

Obituary by Joan Drury with editing by Kelly Kager