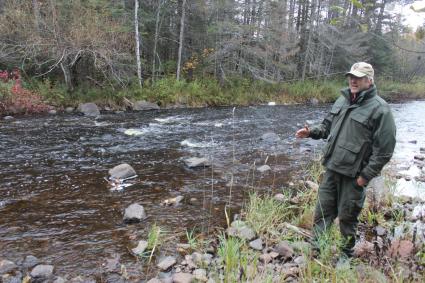 Like many rivers and streams along Minnesota’s North Shore, the summer of 2021 was challenging for the Baptism River. The traditionally cool waters of the Baptism – which flows through Finland near Highway 1 before dropping down to Lake Superior at Tettegouche State Park – warmed and, in some cases, literally vanished this year.

As the rivers and streams went dry this summer and the temperature of the remaining water warmed up, fish began to suffer. Among the fish impacted were a cherished species for many North Shore anglers: brook trout.

Dean Paron, the Finland Area Fisheries Supervisor with the Minnesota Department of Natural Resources, said brook trout are migratory and they will move to areas of cool water and preferably deep water.

“These areas were very limited this year and many parts of many stretches were very low, at critical levels,” Paron said. “If I were to guess, I would suspect that this was a very bad summer for brook trout.”

Paron and others from the Finland fisheries office are pulling in temperature monitors at the end of October and will know exactly how warm the water in the Baptism was in 2021. The water temperature likely peaked in late August and early September, when wildfires burned throughout the region and daily air temperatures continually reached 90 degrees.

“Obviously, if trout cannot get to areas of cool deeper water, this thermal refuge, they are likely to perish or be severely stressed,” Paron said. “This leads to poor growth, susceptibility to disease, or exposed to things like avian predation – most likely avian.”

Despite conditions that were anything but ideal, Paron told WTIP’s Joe Friedrichs in October that trout are resilient and a small population can recover if the habitat and conditions are good for a few years.

“We are also in the beginning stages of a trout tracking program where we hope to learn more about trout behavior and movement throughout the year,” he said. “This combined with long term monitoring stations will hopefully give us a better idea of how trout are affected by these events, how they respond, and what potential areas we can improve on to keep populations sustainable.”