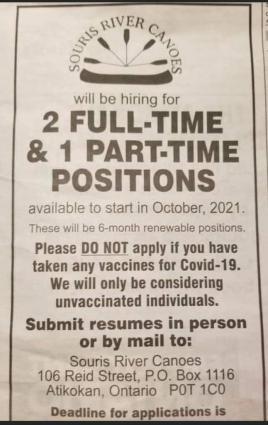 A canoe manufacturer in Canada that found a competitive niche in the Boundary Waters region is making headlines in September after the business posted a classified in an Ontario newspaper requiring applicants to not be vaccinated against COVID-19.

The classified ad from Souris River Canoes printed in the Sept. 1 edition of the Atikokan Progress reads: “Please DO NOT apply if you have taken any vaccines for COVID-19. We will only be considering unvaccinated individuals.”

There has been swift backlash against the company in the week since the ad was printed in the Atikokan newspaper. Comments from the paddling community are abundant on social media, with most expressing their desire to distance themselves from the company.

Mike Bartz is a Cook County resident who owns Border Lakes Touring Company. Bartz guides people on canoe trips throughout the Boundary Waters region. WTIP spoke with Bartz about a letter he wrote this week to the company and to learn more about his reaction to the Souris River classified ad. Bartz, who described himself as a supporter of Souris Rivers and one who appreciated their canoes, sent an email to the owners of the company that reads in part:

“After seeing your bizarre employment opportunity ad I was shocked and saddened. I’m not sure where you are coming from but to make not being vaccinated a condition of employment is just, well, weird. I am curious if people who have been vaccinated for measles, mumps, rubella, polio, smallpox, HPV, hepatitis, shingles are also unemployable at your company?

I believe in your right to choose but to encourage others to make a decision which can and will endanger their lives and the lives of others around them is, well, reckless and dangerous.

Ignorance is the lack of knowledge. Stupidity is ignoring it.”

WTIP spoke by phone Sept. 9 with Arlene Robinson, a co-owner of Souris River Canoes. Though she declined to comment on the situation over the phone, Robinson said she would eventually respond via email to questions about the classified ad the company published in the newspaper. WTIP originally contacted the owners of Souris River Canoes on Sept. 6 for comment.

Michael McKinnon is the publisher of the Atikokan Progress. The newspaper is published in the small town of Atikokan on the north side of Quetico Provincial Park in Ontario. McKinnon verified with WTIP that the Souris River classified ad appeared in the Sept. 1 edition of the newspaper.

“They ran the ad a second week, September 8, without any mention of vaccinations,” he said.

Missing from the classified ad were the lines “please DO NOT apply if you have taken any vaccines for COVID-19. We will only be considering unvaccinated individuals,” McKinnon said.

Meanwhile, WTIP contacted numerous canoe outfitters in Cook County this week, including along the Gunflint Trail, to hear their reaction to the situation. All of the outfitters along the Trail said they would not be ordering new canoes from Souris River for the 2022 season, though some said they previously had no plans to order from the Atikokan-based company due to orders with other canoe manufacturers.

For his part, Bartz wrote in his missive to Souris River executives that he would no longer be supporting their product.

“I will no longer endorse or buy your canoes,” Bartz wrote. “I will encourage others to not support your company. It is heartbreaking for me as I have always loved your boats and really wanted to pick up a Wilderness 18 for my retirement but I can no longer paddle a canoe with the Souris River logo on it with a clear conscience.”