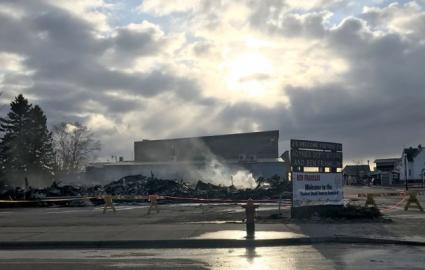 Businesses destroyed by April 13 fire get go-ahead for cleanup

A devastating fire destroyed three buildings in Grand Marais on April 13. Despite valiant efforts of local fire departments, the buildings that housed Picnic & Pine, Crooked Spoon Cafe and White Pine North, were all lost, changing the face of downtown Grand Marais. The fire left a huge pile of debris and concern about when the remains could be removed. The business owners received good news last week–cleanup can begin as soon as contractors have time to take on the job.

Kelsey Kennedy, owner of the Picnic and Pine gift shop, confirmed that she has yet to hear anything official from the State Fire Marshal. However, Kennedy told WTIP that the insurance companies for the businesses had agreed to a financial break down of the cleanup and the site had been released.

Kennedy said the businesses are working with Edwin E. Thoreson, Inc. on the debris removal.

Kennedy said it will be difficult to see all evidence of what was once there wiped clean, but added it is important to complete the cleanup for the safety of the community.

Tyler and Jessica Dean, who had purchased White Pine North just months before the devastating fire also said the insurance companies “released the property.” Tyler Dean said, “We can now begin cleanup. We are obviously super excited about this. We are now just waiting on Thoreson’s to let us know when they have availability to start.”

As far as when rebuilding will begin, none of the business owners are ready to share their plans. Kennedy of Picnic and Pine explained, “I don’t know if anyone has had time to look at rebuilding—what that would look like or means, etc. I know I have been working on insurance paperwork since the fire. It has been very consuming getting it put together.”

In an email answer to WTIP’s inquiry, Tyler Dean of White Pine North wrote, “As far as our future plans, we have started selling our coffee online again, which has been going well. Once the site gets cleaned up, it will be easier to focus on the future plans. The hope of course is to rebuild and we are moving in that direction.”

But like Kelsey Kennedy, Dean said, “There are just many details to figure out with that.”

The owners of Crooked Spoon Restaurant also said there are too many unknowns to share plans. In a recent Facebook post, they shared a heartfelt message from all three businesses. They wrote, “Thank you for the countless messages, emails, phone calls, cards and well wishes. Thank you for the meals you organized or prepared for us.

“Thank you for the monetary donations, from the smallest to the largest we are overwhelmed with the financial support. Thank you for everyone who patronized our businesses over the years.

“Thank you for giving us space to grieve our losses. Although we would like to thank each and everyone individually, we realize that is not possible because of the huge outpouring of love and support we have seen. As we look into the future, we are all trying to find a path forward. We look forward to thanking you in person when that time comes.”