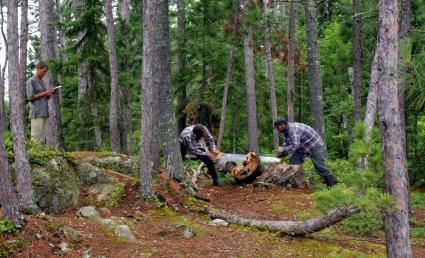 During Memorial Day weekend the Gunflint Trail Historical Society unveiled a new exhibit at Chik-Wauk Museum & Nature Center near the end of the Gunflint Trail. The exhibit is called ‘Shifting Perspectives: Fire in the Wilderness.’

Dr. Evan Larson is a dendrochronologist and professor at the University of Wisconsin Platteville. Larson, along with Lane Johnson, a research forester with the University of Minnesota Cloquet Forestry Center, were both involved in the recent research and in working with the Gunflint Trail Historical Society to develop the exhibit.

WTIP had the opportunity to speak with Lane and Johnson just days before the exhibit was opened to the public at the end of the Gunflint Trail. During the course of our nearly hour-long conversation, nearly a dozen vehicles rolled past the radio station on Highway 61, presumably en route to the BWCA or other lakes on Superior National Forest. Indeed, many of the canoeists would marvel at stands of red or white pine during their trips, particularly those along the border lakes separating or sharing the border of the United States and Canada.

What Larson and Johnson are curious about is would these stands of majestic pines be there without human intervention from hundreds of years ago, and if more fires aren’t allowed to burn in the BWCA and Quetico, how long will these trees continue to thrive in the area? Furthermore, Larson asks, should humans actually be starting some of these necessary fires, despite what some consider a risk or hazardous to outdoor recreation? In short, Larson says he and other researchers are proposing what would it mean if landscapes we now consider wilderness were, at least in part, the legacies of human activity?

The word ‘fire’ for a property owner along the Gunflint Trail, or other areas near and around the BWCA, is not always a welcomed talking point. When referencing the 2007 Ham Lake Fire or the 2006 Cavity Lake Fire, Gunflint Trail residents often note how close the fires, particularly the Ham Lake Fire, came to damaging personal property. And indeed, for some property owners, their cabins were completely destroyed by the fire.

In August 2019, the Forest Service hosted a meeting at the Mid-Gunflint Trail Fire Hall. The Mid-Gunflint Trail area is at high risk for property loss and other damage should a wildfire erupt in the near future, according to information shared by the US Forest Service during a public meeting. After sharing a plethora of information regarding fire management strategies and tools the Forest Service utilizes in the local forests when it comes to wildfires both inside and outside of the BWCA, the focus of the meeting turned to a series of prescribed burns scheduled to take place sometime in the near future, potentially in 2021. One of these prescribed burns will be referred to in media reports and by Forest Service personnel as the “Duncan Lake Prescribed Fire.’ This fire will include three units totaling nearly 6,000 acres within the BWCA approximately 22 miles north of Grand Marais. The idea of burning a pine forest near one of the most popular lakes along the Gunflint Trail, Duncan Lake, was appalling to some outdoor enthusiasts who either frequent or live near the canoe-country wilderness, or both.

Johnson said their research about the history of fire in the Boundary Waters can hopefully assist in understanding the role fire can, and perhaps should play in the wilderness.

“When wilderness users or community members are vocally opposed to prescribed fire, I think it’s useful to take a step back and remind people that this is a system that’s supposed to burn,” he said. “It’s burned for millennia and it’s going to burn at some point. It’s not if, it’s when it’s going to burn. And so when it comes to prescribed fire planning and what the Forest Service is thinking about these different blocks, either in the wilderness or outside the wilderness, it’s about choosing the time and the place where and when that event happens.”

Learn more by listening to the audio shared below.