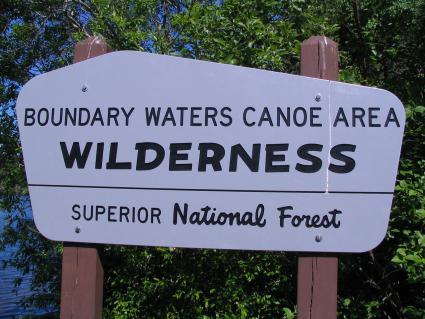 BWCA to reopen May 5 for day use only

The Boundary Waters Canoe Area Wilderness will remain closed for overnight trips until May 18 due to ongoing concerns about the new coronavirus.

However, day-use of the BWCA will be allowed starting Tuesday, May 5.

Day use of the BWCA means many local anglers in Cook, Lake and St. Louis counties will indeed get to visit lakes that are located partially or entirely within the federally-protected wilderness area. Examples of this on the eastern side of the wilderness include lakes such as Brule, Daniels, Pine (near McFarland), Ram, Seagull, Saganaga (on the U.S. side only as the Canadian border is closed) and others popular near the start of the fishing season in Minnesota. As of May 4, some of these lakes are still holding significant amounts of ice, though sunny skies and temperatures in the mid to low 50s are forecast for most of the week ahead.

The Minnesota Fishing Opener is set for Saturday, May 9, with state officials noting that outdoor recreation is not only allowed near one’s community, but encouraged. State officials are also stressing the continued need for social distancing while engaging in any form of outdoor recreation, including hiking, fishing and canoeing.

All camping is currently prohibited across the Superior National Forest at this time, including the BWCA. Overnight reservations made through May 17 will receive a full refund, including reservations fees, according to Suzanne Hirsh, a spokesperson for the U.S. Forest Service based in Duluth.

Hirsh says this change in the status of the BWCA aligns with the Gov. Tim Walz’s request that people recreate close to home and avoid engaging in unnecessary travel. By allowing only day use of the BWCA, there will be opportunities for local recreation and businesses to start the season, according to the Forest Service.

In addition to the camping ban, all campfires are currently not allowed on the Superior National Forest. However, camp stoves will now be allowed under the updated version of the campfire ban.

In recent days, Minnesota Gov. Tim Walz extended the statewide stay-at-home order until May 18. Previous statements from the U.S. Forest Service indicated the opening of the BWCA would align with actions taken by the state. Fishing has been noted by state officials and agencies, including the Minnesota Department of Natural Resources, as a recommended means of outdoor recreation during the ongoing stay-at-home order. However, anglers are advised to fish only near their community, meaning most of the fishing and recreation in the BWCA, at least until May 18, is for Minnesota residents who live near the wilderness.