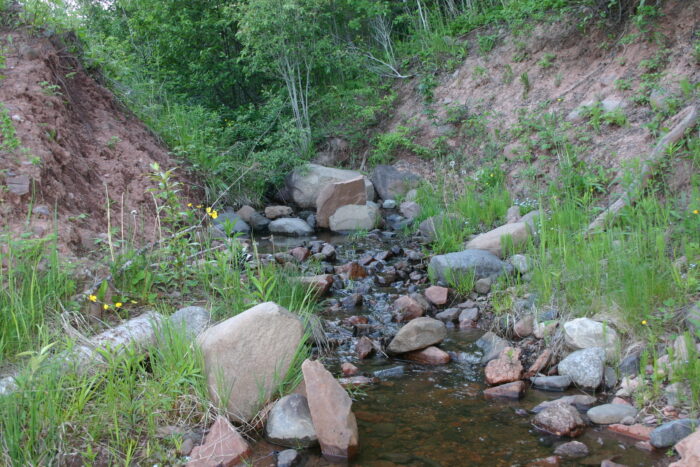 At the latest meeting of the Grand Marais City Council on Wednesday, April 13, the city reviewed its stormwater management plan, approved summer hires for the park department, and announced its 2022 Public Utilities Commission scholarship awardees.

The city’s sustainability coordinator, Shane Steele, was back before the council. Steele was at the March 12 meeting with an update on the city’s Climate Action Plan. At this April meeting, Steele gave an update on the stormwater management plan adopted by the city in 2018.

Steele told the council that several projects had been completed or are scheduled to be completed by the end of this year. That includes the installation of a sediment basin at 2nd Street near the wastewater treatment plant; a rain garden at 2nd Avenue East, by the Best Western; a natural shoreline project at East Bay Suites; and the Highway 61 stormwater infrastructure.

Steele said having a stormwater management plan was helpful in the Highway 61 reconstruction. He also said the plan has been used during numerous site visits with city landowners.

Steele said because of implementing the plan, there has been improved resilience to large rain events. The plan has created a more informed citizenry regarding stormwater mitigation and green infrastructure in the community. And Steele said the Grand Marais plan has inspired other communities along the North Shore to develop their own stormwater management plans.

WTIP Community Radio checked in with Mayor Jay DeCoux after the meeting with the stormwater management plan update. He said the council was pleased with the projects that have been done and look forward to future projects, which are a stormwater pond on 8th Avenue; stormwater mitigation along 4th and 5th Avenue; and bank stabilization and sediment runoff reduction at the Village Ditch (Nature Boy Creek). Many of these projects are being done by Cook County Soil & Water, but Steele serves as the city’s liaison as projects move forward. Nature Boy Creek can be seen in the photo above.

WTIP noted that Steele has a variety of roles with the city now and asked if he is a city employee, full- or part-time. DeCoux said he is part-time. WTIP asked how the sustainability coordinator is funded and the mayor said it is partially funded by the Grand Marais Public Utilities Commission and partly through grants.

The April meeting was relatively short with other matters handled quickly, such as the hiring of three seasonal park maintenance workers. Peter Abernathy, Tanner Hoskins, and Lucas Hoskins will be working for the park department for the summer.

Finally, the council approved the scholarships awarded to a Cook County High School graduate from the Grand Marais Public Utilities Commission. The scholarship applications required the seniors to write an essay on how public utilities impact their lives. Scholarship winners were CeCe Chemlik, who receives $500; RaeAnne Silence, who receives $300 and Greta Roth, who receives $200. CeCe’s essay is submitted to the city’s power provider, Southern Minnesota Municipal Power Agency (SMMPA) for a possible larger scholarship.

The next Grand Marais City Council meeting is Wednesday, April 27 at 6:30 p.m. in the city council chambers at city hall. On the agenda is consideration of a request from Lori Austin for a variance for the construction of an accessory dwelling unit on a city lot. That request was approved at the city planning meeting on April 6. The council will also consider a request for assistance with the 2022 Grand Marais Arts Festival, which will again be held on the School District 166 campus. Also on the agenda is an update and request from the nonprofit Go Dog North Shore for the finalization of a contract for a dog park.

The public is welcome to attend council meetings at city hall. City meetings can also be viewed on the city’s YouTube channel.

WTIP’s Rhonda Silence speaks with Mayor Jay DeCoux to learn more about actions at the meeting in this interview.