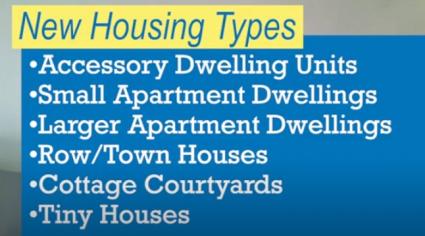 There have been many efforts to meet the need for housing on the North Shore. The city of Grand Marais is one entity looking at housing supplies. The city’s work included hiring a consultant, HKGi, to research what is available and to learn what obstacles prevent the creation of housing in the city.

HKGi held a number of meetings with the city of Grand Marais, including focus groups with some of the stakeholders—the people who are seeking housing in the Grand Marais area.

Looking at the information gathered, HKGi prioritized some possible solutions. The city is now ready to make ordinance changes to help make those solutions reality. However, the city needs to know what the citizens of Grand Marais think about those potential ordinance/zoning changes.

Ideas proposed are reducing minimum lot sizes, from 10,000 square feet to 4,000 and lot width from 75 feet to 40. Under the ordinance change, the front lot setback would be flexible, to match the setback of adjacent homes.

These changes could enable developers to create what is described as “accessory dwelling units,” sometimes called “granny pods.” These are small structures built on an existing lot.

The proposal also could enable large or small apartment buildings, a townhouse complex, and tiny houses (as long as they are connected to the city’s infrastructure.)

The hope, according to Jeff Miller of HKGi is to provide guidance for developers who want to create such housing stock but are confused by the actual status of lots in Grand Marais. Many homes were built before the current city ordinance, which was last updated in 1971. Many lots do not comply with the current city housing ordinance.

City Administrator Mike Roth notes that most Grand Marais citizens are okay with that. There have been a number of single-family homes built in Grand Marais in recent years on smaller lots. Those homes were allowed after the homeowner came to Grand Marais Planning and Zoning and received variances.

Members of the Planning Commission have said it is time to get the ordinances in line with what really exists. The Planning commission will be considering a draft plan on Wednesday, July 1.

Comments can be sent by email to housingplan@grandmarais.city or mailed to the city at PO Box 600, Grand Marais, MN 55604.

WTIP’s Rhonda Silence visited with city officials and Jeff Miller of HKGI about their work in May. Here’s their online conversation.