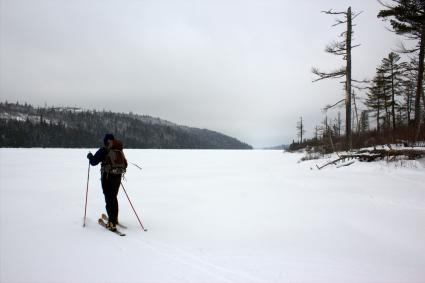 Climate change impacts will be wide ranging across 1854 treaty lands

It’s no secret that many people like to cross country ski and downhill ski near the North Shore each winter. Both are economic drivers and bring people to the area for vacations. In addition, numerous community members enjoy skiing in Cook County during the winter months.

With that in mind, research from climate biologists working with the 1854 Treaty Authority indicates the window to ski could be shrinking in the far reaches of northeastern Minnesota.

Climate change is projected to lead to a 4 to 5 degree Fahrenheit increase in annual temperatures throughout the 1854 Ceded Territory by the 2050s, according to a comprehensive climate change study compiled by researchers working for the treaty authority. The temperature flux will be even more dramatic during the winter months, with an increase of 5 to 6 degrees expected.

“This will continue to shorten the winter season and lead to a transition in winter precipitation from snow to rain,” the report says.

Though precipitation amounts could, in some cases, increase near Lake Superior due to climate change, runoff is likely to have a negative impact on water quality in the region. Furthermore, increasing winter temperatures points to a continued reduction in winter snowpack, the study finds. Overall, climate change is expected to negatively impact water quality within the 1854 Ceded Territory and on reservations, according to the study.

In addition to skiing, other forms of outdoor recreation that could be impacted by warmer winters include snowmobiling and ice fishing, Sorensen said.

This WTIP program coincided with the international climate talks in Scotland. The role of Indigenous communities in this global climate conference is crucial as these communities are often disproportionately impacted by climate change and are at the front lines of adapting to changes and building community resilience, according to officials with the 1854 Treaty Authority.

Other topics discussed during the hour long program include climate change impacts to moose, fish and other wildlife in the region.

The 1854 Treaty Authority is governed by the Bois Forte and Grand Portage bands. It operates with the mandate of preserving and protecting off-reservation treaty resources across more than 5 million acres covering present day northeastern Minnesota.

Click here to learn more about the 1854 Treaty Authority.

To view videos specific to the topics discussed during the Nov. 4 community conversation on WTIP, click here and here.