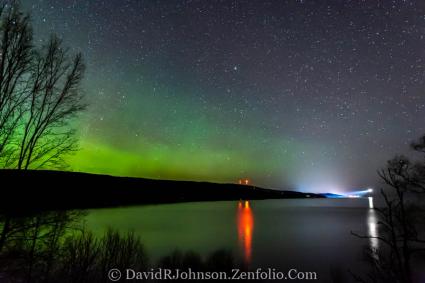 Coast Guard called to search for possible boat in distress

At approximately 7:52 p.m. on March 13, Cook County Sheriff’s Office dispatcher received a call from a group of juveniles on The Point in Grand Marais, stating that they had seen a red flare over Lake Superior, south of the Coast Guard Station. The youths also thought they heard a “popping noise” when the light was observed.

Cook County notified the U.S. Coast Guard (USCG) in Duluth which stated that due to increased boating activity, they would be sending a helicopter from Traverse City, Michigan to perform an initial search.

The Coast Guard performed search operations with air and water resources until approximately 1:34 a.m. This photo was taken by Grand Marais photographer David R. Johnson who was out shooting Northern Lights when the water and air searches got underway.

Sheriff Pat Eliasen told WTIP that the Cook County Sheriff’s Office has received no reports of missing people or boaters and all boat launches have been checked. He also said the sheriff’s office received two reports from witnesses who observed what appeared to be a shooting star at the same time this was reported.

The Coast Guard flew at daybreak on March 14 and did not observe anything on the lake.