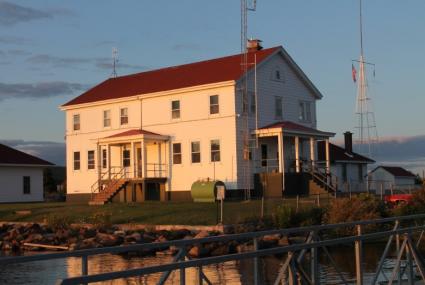 On June 9, the U.S. Coast Guard published an announcement that the North Superior Station, the Coast Guard facility in Grand Marais, is on the list of Great Lakes stations that will be “consolidated” with other stations. That means there would no longer be a Coast Guard presence on the Grand Marais waterfront.

The Grand Marais station is among four seasonal stations slated for closure. The others are in Massachusetts, New Jersey, and Holland, Michigan. The notice states that “…many stations were established at a time when boats lacked engines and were powered by oars and paddles.”

The Coast Guard believes with modern boat operating speeds and improved direction-finding technology, many calls for Coast Guard assistance can be handled by other agencies in the vicinity. According to Coast Guard spokesperson Lt. Paul Rhynard, the Coast Guard is seldom the first responders on the scene of a water emergency.

Lt. Rhynard points to the number of emergency calls received, which averaged less than one case per year over the last 10 years, as the reason the Grand Marais Station is no longer necessary. He credits that low number in part to the Lake Superior boating community for its safe operations.

In a conversation with WTIP, Lt. Rhynard said, “I think it’s really important that people understand that if we thought that we were putting people in danger—or excess danger—or adding risk–we wouldn’t do this. Safety of life—that’s our number one concern.”

If the consolidation, or closure, happens it will be in 2022, but with the seasonal nature of the North Superior Station, that means the last Coast Guard personnel will be gone after Labor Day 2021.

Lt. Rhynard said anyone who wishes to comment on the proposed closure may do so by visiting the online Federal Register here: Consolidation of Redundant Coast Guard Boat Stations

WTIP’s Rhonda Silence spoke with Lt. Paul Rhynard about this possible closure and about the future of the Coast Guard building on the Grand Marais waterfront.

** This article was corrected regarding the number of Coast Guard calls, which averaged less than one case per year over the decade. **