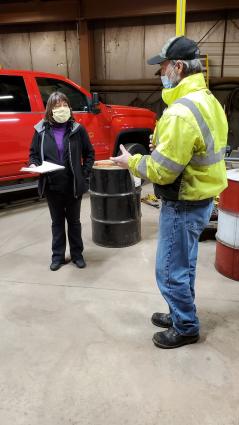 The Cook County Commissioners got a behind-the-scenes look at a number of county-owned buildings on Thursday, May 8. County commissioners, staff, and a few members of the public took part in the tour that included the courthouse, the county highway department complex, the Cook County YMCA, the community center, and the law enforcement center.

WTIP’s Rhonda Silence joined the county representatives for part of the tour, taking a look at the highway department buildings and the Cook County YMCA.

At the highway department, there was quite a bit of discussion about the heaters and ventilation in the garage space. There is an ongoing problem of exhaust fumes leaking into the office space. Highway Department Maintenance Supervisor Josh Dix noted though, that the problem is not just keeping fumes out of offices. Ventilation is not sufficient for the mechanics in the garage itself.

Dix also noted that the garage really didn’t give the mechanics room to work.

The group got a tour through the highway department office area, which included the combination meeting room/lunchroom. Engineer Robby Hass said the meeting room seems a bit more spacious than it used to be. County Commissioner Ginny Storlie, who had been on previous tours of the site, said it looks great.

However, the solution to making more room in the meeting room meant moving files to shelves in the men’s restroom. The lack of storage issue was echoed by Highway Department Accountant Lisa Sorlie, who pointed out that work gloves and some other equipment are stored in the women’s restroom.

The need for more storage continued as the tour moved to the cold storage building, used to store signs, traffic control equipment, and seasonal road equipment. Hass said he wasn’t certain of the history of the building, but it was moved to the highway department from the Cook County Airport many years ago. The building has a dirt floor, which has led to the rotting timbers along the wall. The ceiling is speckled with holes, letting in light, as well as rain and snow. The cold storage building was filled wall-to-wall with seasonally-stored equipment, something that is quite inconvenient if the piece of equipment is lodged between two other vehicles.

Hass said ideally, that building would be removed and that space used for a covered sand/salt building.

The tour ended at the northern portion of the property where Hass said a new, larger cold storage structure could be constructed. The location would allow for a structure that would make moving vehicles in and out much easier. It would also better protect equipment from the elements.

After the tour of the highway department, the group reconvened at the Cook County Community YMCA. YMCA Executive Director Emily Marshall joined the group as County Maintenance Director Brian Silence did a walk-through pointing out building defects that the county had spent time and money correcting.

An example was the inadequate drains for the locker rooms, which led to water damage and mold in the locker rooms. County commissioners and members of the public saw the workout equipment room, which was once flooded due to improper grading on the backside of the building during remodeling. They visited the noisy pool equipment room and then the pool area itself, where Maintenance Director Silence talked about the shortcuts taken during construction that led to a nearly collapsed roof over the hot tub.

Silence said for the most part, things like that at the YMCA building have been corrected, although access to the roof is still problematic. Silence explained that maintenance staff must go onto the roof to check and change pool filters and to reset the pool ventilation system whenever there is a power outage, no matter how small. A narrow ladder leads to a trap door on the roof, which becomes snow and ice-covered in the winter. Silence is hoping to find a better way to access the roof.

Commissioner Dave Mills asked if things were better with the time and money that the county had invested in the YMCA building. Silence said it is definitely better. He said before the many repairs–replacing ductwork and parts of the ceiling in the pool and hot tub area; chiseling in larger drains in the locker rooms; cleaning and repainting with mold-resistant paint–county maintenance staff spent more time on the YMCA than all of the other county buildings combined.

Now though, Maintenance Director Silence said overall he was pleased with the current building operations.

Before leaving the group to the rest of the tour, WTIP’s Rhonda Silence checked in with County Administrator James Joerke. She asked if anyone in the group had given feedback on any “red flag” areas that need immediate attention. Administrator Joerke said not yet. He said there would definitely be some sort of debriefing to talk about the areas of concern. He noted that there was a priority list of potential projects in the county’s capital improvement plan a few years ago, but it needed a fresh look. He said, “I know we will have a lot of conversations about these buildings.”

Joerke added that the county is very lucky to have the maintenance staff it does. He said they are taking very good care of the buildings, noting that most of the buildings are old and take a lot of work. Joerke said he hopes to develop a capital improvement plan that is proactive, rather than reactive.
WTIP’s Rhonda Silence shares this report from the tour. Click on the photo to see some of the areas discussed. 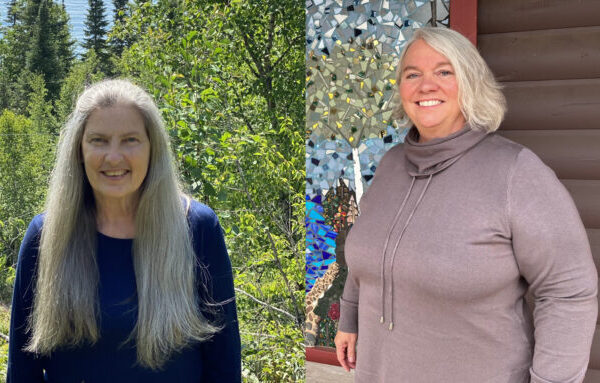