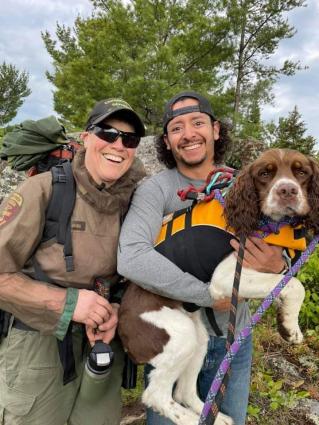 A hardy little springer spaniel named Bogi survived a tumble down a steep cliff and a rainy night outdoors during Memorial Day weekend in Cook County.

Bogi was rescued from a cliff edge early Monday morning, May 31.

His owners, Julian Stanke and Amanda Farrell, were out for a day hike on the Superior Hiking Trail near Hovland. They had Bogi and their other dog, Ted, on leashes for the entire hike, but paused for a photo at an overlook. The energetic spaniel bolted and disappeared.

The couple was able to eventually find where he had landed, about 25-30 feet down. He was moving and apparently unhurt, but there was no safe way to reach him. After several unsuccessful attempts, Julian and Amanda knew they had to leave him to get help the next morning.

Minnesota Department of Natural Resources Conservation Officer Mary Manning saw the couple’s frantic social media post asking for help and showed up the next morning to meet Julian and Amanda at the trailhead with rope climbing equipment.

WTIP reached out to Conservation Officer Manning and the pet owners to hear more of Bogi’s story.

Below is the audio to WTIP’s Rhonda Silence speaking with DNR Conservation Officer Manning and Julian Stanke. 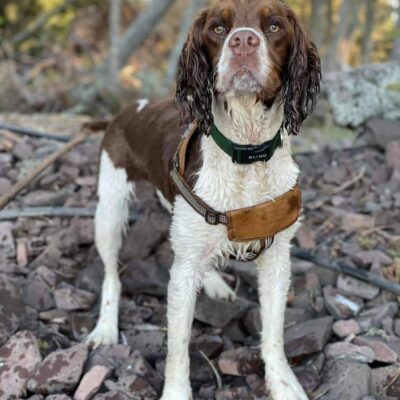 Bogi after his fall near the Superior Hiking Trail. Submitted photo