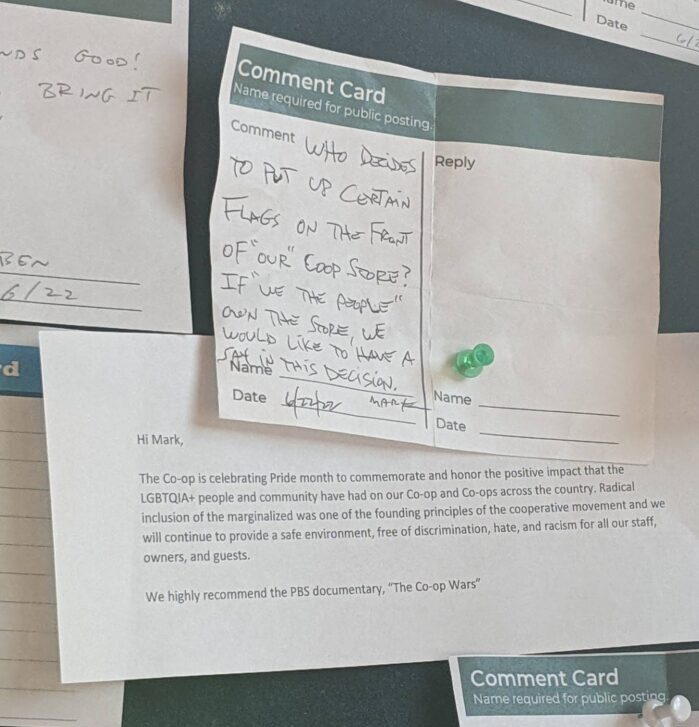 In recognition of June being Pride month, some Cook County residents and businesses displayed flags or signs featuring rainbow colors in support of the LGBTQ community. Among the local businesses showing their support of Pride month was the Cook County Whole Foods Co-Op. The co-op had a Pride flag hanging on the exterior of the building near the entrance to the downtown business throughout the month.

Based on feedback the store received, some community members were unhappy with the Pride flag hanging outside the co-op. A note posted on the community bulletin board inside the co-op read: “Who decides to put up certain flags on the front of ‘our’ co-op store? If ‘we the people’ own the store, we would like to have a say in this decision.” The note was signed by an individual who identified themselves as Mark. The missive was dated June 22.

In response, co-op management posted: “Hi, Mark. The Co-op is celebrating Pride month to commemorate and honor the positive impact that the LGBTQIA+ people and community have had on our Co-op and Co-ops across the country. Radical inclusion of the marginalized was one of the founding principles of the cooperative movement and we will continue to provide a safe environment, free of discrimination, hate, and racism for all our staff, owners and guests.”

WTIP’s Joe’s Friedrichs went to the co-op on the final day of June to learn more about the situation. He spoke with co-op management and various community members. Listen to a full report in the audio below.

Note: The Cook County Whole Foods Co-Op planned to take down the Pride flag outside of the building starting July 1, with the conclusion of June and Pride month. A similar flag inside the entryway of the co-op will remain, according to co-op management.