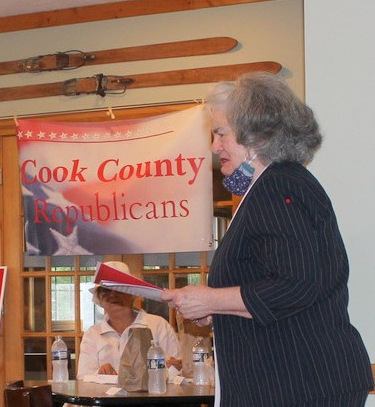 About 20 people attended a local meeting of the Minnesota Republican Party July 21 that was held at Skyport Lodge on the shores of Devil Track Lake.

According to a co-owner of the business, Rachelle Christianson, Skyport Lodge had no affiliation with the event other than allowing the group to gather inside their facility.

Cook County GOP Chair Mary Petz organized the event. She told WTIP’s Joe Friedrichs that the meeting, featuring Jennifer Carnahan, the chair of the state Republican party, was originally scheduled to take place at Lutsen Resort. Petz explained to WTIP that the Cook County Community Center was another possibility for the event after the GOP found out it would not take place at Lutsen Resort. Ultimately, the event was held at Skyport Lodge and the GOP provided the food for the luncheon.

Petz spoke with Friedrichs July 23 on the morning news program, Daybreak, about this story. The audio below is their conversation, which first appeared live on the air.