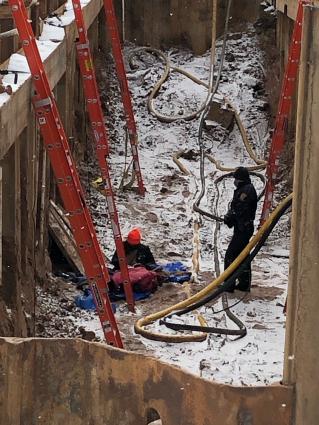 A Cook County resident was arrested this week for trespassing and obstructing the legal process at the site of the Line 3 oil pipeline project in northern Minnesota.

The local resident, Nia, agreed to share her story with WTIP if her first name only was referenced in the interview. Nia was arrested Jan. 18 at a remote site where the pipeline is being constructed in Carlton County. The site is near a new camp where Water Protectors, as they prefer to be called, are attempting to halt construction of the controversial pipeline.

Enbridge Energy began construction on its Line 3 crude oil pipeline replacement in Minnesota on Dec. 1, a day after state regulators approved the final permit for the $2.6 billion project amid legal challenges from local activists and Indigenous groups, according to the Associated Press.

Nia, a new resident to Minnesota, said she wanted to show her love for the land of 10,000 lakes in a physical form. She crawled into a trench Jan. 18 where the pipeline is being routed and refused to come out after construction workers and law enforcement asked her to leave. Nia was eventually removed from the pipeline trench after she was strapped to a stretcher and lifted back to solid ground. She was then taken to the Carlton County Jail. She is charged with two misdemeanors stemming from the incident.

Nia spoke with WTIP’s Joe Friedrichs about the situation. The audio below is their conversation from Jan. 20.