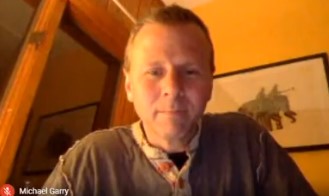 As WTIP reported after the January 13 Grand Marais city council meeting, Councilor Michael Garry created some controversy during the first few minutes of the meeting when he inserted a line about the president while taking the oath of office.

Following the line in which the oath-taker pledges to uphold the Constitution, Garry added, “Unlike my president.”

His statement and the startled reaction of his colleagues did not go unnoticed, but the meeting progressed without any discussion of the oath.

Almost immediately, Councilor Garry sent an apology to the council, stating:
I would like to apologize for my inappropriate attempt at humor during my swearing-in last night. I do take my position, as you do, very seriously. I am proud to have been elected to serve with such upstanding members of our community. I know we will have a very productive session this year. Thank you.

However, that did not stop the social media conversation launched by citizens who had watched the meeting. Garry received praise from some who thought his comment was an act of civil disobedience. Others felt he had violated an important part of becoming a government official.

WTIP’s Rhonda Silence reached out to Councilor Michael Garry to hear what he had to say. Here’s their conversation.