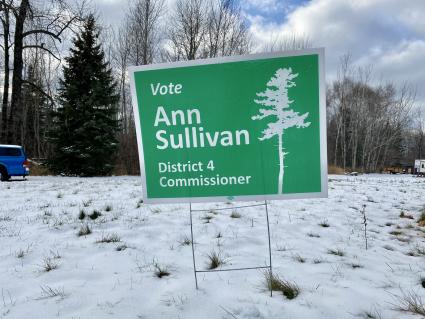 Campaign signs covered all corners of Cook County during the 2020 election season. Signs in support of local candidates looking to serve on the Cook County Board of Commissioners and the Grand Marais City Council were common, as were signs for nominees running for Congress and the candidates vying to be president of the United States.

As the snow starts to fly and Election Day has come and gone, the question of ‘what to do with the campaign signs?’ once again surfaces.

According to Minnesota Statutes 211B.045, “all noncommercial signs of any size may be posted in any number beginning 46 days before the state primary in a state general election year until ten days following the state general election.” That ten-day window is Friday, Nov. 13. A misdemeanor citation could be issued if compliance with taking down candidate signs becomes an issue.

Cook County Attorney Molly Hicken told WTIP “it is likely the county or city would contact you directly and request your sign be removed before removing your sign or citing you for a violation. The exception may be if you have placed your sign within a public right of way while the municipality is plowing or performing maintenance within the right of way.”

Though there are gray areas for varying interpretations of state statutes and county ordinances, the easiest way to think of this particular topic is this: The election is over, it’s time to take down the candidate signs.

The Minnesota Secretary of State website adds further guidance on this topic as well. A posting on this issue reads: “Local jurisdictions may have ordinances restricting the number and size of signs. If a jurisdiction does have such ordinances, in an even year these ordinances cannot be enforced for a specified time before and after Election Day. In jurisdictions which have no sign ordinance, campaign signs may be posted in any size and number throughout the year. For 2020, the period when local sign ordinances may not be enforced begins June 26 and ends November 13.”

That being the case, candidate signs for people who were running for office in the Nov. 3 election is just one piece of this equation. In Cook County, for example, there is a special election that will take place Feb. 9 to fill the now vacant commissioner position for District 1 on the county board. The primary election for this seat was on the November ballot, with candidates Paula Marie Powell and Bob Svaleson advancing to the special election.

Hicken said in a statement this week that “Cook County will allow special election related campaign signs of any size or number in the unincorporated parts of the county, unless otherwise prohibited by state law or county ordinance, within the time period of 46 days prior to the county special election and 10 days after the special election.”

In other words, it is legal to put up candidate signs for the District 1 special election starting 46 days before Feb. 9. As fate would have it, that day happens to fall on Christmas Day, Dec. 25, 2020.

The other issue surrounding signs posted around Cook County this year are what non-candidate signs, including those that read “Black Lives Matter” or “Blue Lives Matter” or any other statements that do not specifically have to do with one candidate running for office or a ballot initiative.

It’s important to note that Cook County has its own sign ordinance that runs in support of the state statute regulating campaign signs. Hicken said the county ordinance specifically states that there is no intent of the ordinance to regulate the message, or content, of a sign on someone’s private property. Hicken said when reading the county ordinance and state statute together, all non-commercial signs (including political/campaign signs) must conform to county code as to size and number by 10 days after the election.

“Small lawn signs of a temporary construction of the type addressed in recent conversations online, such as ‘Cook County Vikings Strong,’ ‘Thank you teachers,’ and ‘Black Lives Matter’ are not prohibited specifically” by the county ordinance unless “they are prohibited because of some other reason,” Hicken said.

Additional examples for when a sign can’t be posted in Cook County include when they exceed 12 sq. feet or when they obscure official traffic control devices or signs, Hicken explained.

Another layer to the discussion is in regard to flags bearing a candidate’s name once the Nov. 13 deadline passes. Hicken points out that the distinction relevant to the state statute about signs “is not ‘political’ vs. ‘non-political,’ or ‘campaign’ vs. ‘non-campaign,’ but ‘commercial’ vs. ‘non-commercial.’”

Similarly, Hicken said the purpose of the county ordinance is “to regulate signs of a commercial nature that are viewed from any vehicular or pedestrian right-of-way.”

As if the equation wasn’t complicated enough, it’s also worth noting that Grand Marais has a different ordinance and set of rules for regulating signs than the county does. Again, it largely falls back on the simple notion of the election being over and the Nov. 13 deadline to take down certain signs.

Regarding any questions about the legality of various signs in Cook County, Hicken said to contact the land services department if you are concerned that you may need a permit for your lawn sign or that it may be prohibited.