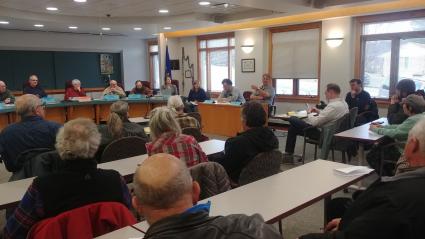 There was a meeting of the Cook County Board of Commissioners Tuesday, Feb. 25. The meeting opened with a public comment period. Local resident Stan Tull spoke about the Border to Border Touring Route. The motorized touring route is no longer being considered in Cook County. The Minnesota Department of Natural Resources sent a letter to the county Feb. 21 saying that B2B would no longer be signed, mapped or included on Cook County roadways. This follows nearly four years of planning and discussion at both the county and state levels.

Tull said he was frustrated with the process and lack of decision making by the county when it came to the border to border route. Tull said the board’s lack of action on supporting or not supporting the B2B was “embarrassing” and that too much time was wasted considering what to do.

The Border to Border Motorized Route will now drop down to Silver Bay and avoid Cook County.

Aside from public comment, the Border to Border Route was not discussed by the commissioners during this week’s meeting of the county board.

Chair Discussion
Moving into the regular portion of this week’s board meeting, the commissioners did discuss how much to spend on new chairs for their main conference and meeting room. Interim County Administrator Rena Rogers said new chairs could be a valued upgrade for the commissioners’ room, but also other rooms in the courthouse where various meetings take place specific to county meetings. The original plan according to the agenda was to order 75 chairs for general seating. Rogers said the board could opt to order 25 chairs, at a cost of just over $1,300 for an adjacent room where county business takes place.

After some brief discussion on the topic, the commissioners voted to purchase nine new leather swivel chairs and to purchase 75 new chairs for the gallery and the adjacent conference room, known as the IT Room.

The total cost of the new chairs will be approximately $6,560.

For more news about the county’s plans to purchase new chairs, listen to the audio below.