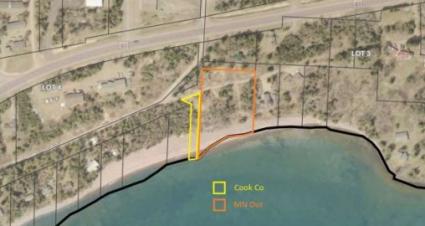 The summer of 2020 brought controversy to a strand of Lake Superior shoreline in Grand Marais. The beach and surrounding area, known as “Passion Pit” encompasses about 35 feet of shoreline owned by Cook County and an additional, larger, parcel owned by the Minnesota Department of Transportation.

The beach adjacent to what was once a MnDOT gravel pit has been the site of family gatherings–and sometimes late night celebrations—for decades. The area is very close to nearby homes, which has led to conflict.

Nearby property owner Dave Homyak spoke to the Cook County Board of Commissioners during public comments last June, asking for clarification of the use of the beach and the area where visitors park. He also asked the county to manage the approximately 35 feet of waterfront under its ownership. He expressed concern about littering, all-terrain vehicle (ATV) use, and late night gatherings. Homyak asked the county to consider placing porta-potties and trash receptacles at the site and creating barriers so ATVs could not get to the beach.

The county board acknowledged the difficulties for the nearby landowners, but also recognized the importance of the beach to the community, as a recreation area, and as well as a remnant of the historic Chippewa City.

Talk turned to possible solutions, including the idea of the county purchasing the MnDOT property, which would offer more beach space and possibly beach access away from the private land. However, according to Homyak, that is not a viable solution as the MnDOT property does not give access to the beach. Homyak asserts that beach visitors would still need to cross his property and that of a neighbor.

Ultimately a small task force was formed and on Monday, January 25, that group presented a report to the Cook County Parks & Trails Commission. The report details short and long term considerations.

In the short-term, the task force noted that something should be done as soon as possible regarding maintenance of the site, such as suggested by Dave Homyak last June—placing porta-potties and trash receptacles, and dog waste bag dispensers in the area. The task force said those short-term actions could give the county time for considering a long-term vision for the Passion Pit beach.

Regarding the long-term vision for the area, the task force said it had reached a consensus that further research and community input is needed. It was noted that if nothing is done, MnDOT could move ahead with auctioning off its property to a private party, reducing public beach access to just 35 feet of shoreline.

The small task force suggested engaging a larger group to evaluate options for the purchase of the MnDOT land; to study the ownership of the surrounding land; and to try to determine what the general public would like to see done with the Passion Pit area.

There was public comment during the Parks & Trails meeting. Myron Bursheim, vice-president of the Cook County Historical Society, said the society wanted to work to ensure the historic significance of the area was preserved. He said the historical society would like to be included as it maintains the Francis Xavier Church near the beach.
Two property owners spoke in favor of a larger task force looking for a solution. Linda Steinworth said her family property was nearby and they had been watching families use the beach for years. She said a recent visit she observed a couple with a young child tossing rocks into the lake. Steinworth said it would be a shame for the public to lose that access. She said, “I really hope an agreement can be reached.”

Property owner Dave Homyak reiterated his concerns, including his belief that the MnDOT property does not provide access to the beach without crossing private property. He said he respected the history of the area and noted that the Anishinabe people who once lived there meant for the lakeshore area to be a residential area. He said the current activity on the beach is “abhorrent.” He summed up his comments by saying he was not anti-park, but added, “I don’t think anyone wants to live next to what I did last summer.”

Staci Drouillard, a Grand Portage Band of Lake Superior Chippewa descendent, said she was one of the task force members and she stated that this should not become a property war. She said the goal of the task force was to look at the area, to see if a longer, public, planning process should take place. She said there was consensus to establish another, larger, group to do that work.

The Parks & Trails Commission agreed that more research was needed and passed a motion to establish a committee to consist of one county staffer, one county commissioner, one representative of the City of Grand Marais, one representative of the Cook County Historical Society, one Parks & Trails Commission member and four members of the public, with at least two of them property owners in the vicinity. The commission agreed to set a nine-month deadline for the new task force, stressing that earlier would be better.

Land Use Director Tim Nelson will facilitate the establishment of that committee.

See the preliminary task force report on pages 11-14 of the meeting agenda.