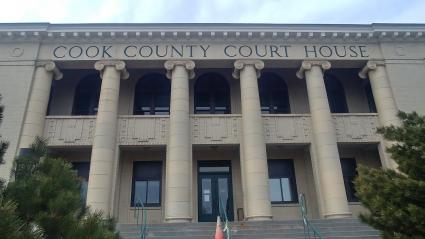 The Cook County Planning Commission met on June 9 and tackled an issue that has historically created some controversy in the county, dog kennels. Directed by the Cook County board of commissioners, the planning commission “revisited” a permit the county board denied on May 25. They also considered a new conditional use permit for another kennel nearby.
The first request—which the county board had denied–was from Jacob Leingang, an aspiring musher, who purchased 7.5 acres of land near County Road 14 and Franks Way. Leingang’s original request was for 45 dogs on the property. After review and approval from the Cook County Planning Commission on May 12, the number of dogs was lowered to 25 dogs. The planning commission approved a two-year interim use permit on a 4-1 vote.
At that time, Land Services and Planning & Zoning Administrator Bill Lane said the approved two-year, 25-dog permit was viewed as a “middle ground” compromise by the planning commission from the original 45-dog request. The planning commission approving the permit was also a challenge of sorts to Leingang to demonstrate he can meet permit conditions, while establishing a functional recreational activity in a predominantly residential area, Lane said. See the planning commission report on Leingang’s request here.

At the Tuesday, May 25 meeting of the Cook County Commissioners, who ultimately make decisions on planning matters, comments were heard from several adjacent property owners. Acknowledging the neighbor’s concerns, after discussion, the commissioners voted to deny the permit, sending it back to the planning commissioner for further review at the June 9 Planning Commission Meeting.

The second discussion of a dog kennel was regarding a conditional use permit application from Erin Altemus and Matthew Schmidt, longtime mushers who have been operating a kennel in a remote area of the Gunflint Trail. They requested a CUP for a 45-dog kennel on 9.92 acres on County Road 14. They plan to live at the kennel. See the conditional use permit and other information here.

The planning & zoning packet noted that 12 letters of notification were sent to nearby property owners and four letters in support of the CUP were received, with three opposed.

The letters in support of the CUP talked about the tradition of mushing in the community and about the history of the property itself, which was used for a dog kennel operation Supporters said they believed Altemus and Schmidt would be responsible kennel operators.

Odin Jorgenson added, “But to be honest, it shouldn’t matter what I think of their application. They have a right to a kennel on their property as long as they meet the specific conditions required by the county. They meet those conditions, end of discussion…As a dogmusher who grew up in this neighborhood and has run dogs on these trails for 37 years, I ask planning and zoning and the county commissioners to put emotions aside and focus on the facts.”

The letters in opposition expressed concern about the noise of a large outdoor kennel and about the treatment of waste from so many dogs on waterways in the area. Property owner Jason Gesch said the county’s Land Use Guide seems to support denial of the CUP. He wrote, “The Land Use Guide plan that you are asked to follow does not accurately reflect our neighborhood and seems ambiguous to me. It identifies Colvill as both an area where dog kennels are encouraged, and an area of higher population density. Those two things don’t really fit together.”

After significant discussion, the Planning Commission finally voted to approve the Altemus/Schmidt conditional use permit on a 4 to 1 vote.

It takes some time to compile information for the county commissioners and get time on the county agenda, so both of these conditional use permits will likely be before the county board on June 22.

The County’s ordinance pertaining to dog kennels can be seen here.

WTIP’s Rhonda Silence spoke with Land Services & Planning Commission Administrator Bill Lane about the planning commission’s discussion and recommendations for the Cook County Board of Commissioners.