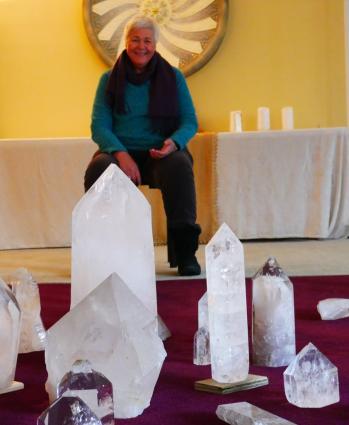 There was a meeting of the Cook County Board of Commissioners on Tuesday, April 14.

Public Comment
One item on the agenda that surfaced during the public comment period and led to discussion by the commissioners later in the meeting was a request from Cook County property owners Christine Day and Alisa Logan to continue running their business near Lake Superior and Highway 61.

According to its website, the business hosts retreats called “Gateway to the Galactic Community.” Listed on the county’s agenda as a “meditation center,” the retreats on the property include attempts to allegedly connect with visitors from outer space known as the Pleiadians.

During the public comment period, Interim County Administrator Rena Rogers read a number of submitted letters from local residents to be shared as official public comments. One of the letters came from Jan Attridge. She lives near the property owned by Day and Logan and said it is not a good fit for such retreats. Attridge compared the situation created by the Pleiadian retreat center to what Native Americans felt in nearby Chippewa City and was recently described by local author Staci Drouillard in her book “Walking The Old Road.” Attridge said in her letter that “once again this land is being invaded.” However, according to Attridge, this time the land is not being invaded by white settlers, but by people who claim to communicate with beings from outer space.

Others also submitted comments to the county speaking against the business operated by Day and Logan. Following these statements, Day, who attended Tuesday’s meeting in person, explained that she feels there is misinformation in the community about her status as a local resident and the purpose of the business she operates from the home on Lake Superior.

Later in the meeting, Tim Nelson from the county’s land services department brought forward the interim-use permit request from Day and Logan regarding the use of their property near Lake Superior.

Day and Logan purchased the property in 2013 and have been holding retreats there for at least several years. Day said that with regard to COVID-19 concerns, no visitors would be attending retreats this summer amid the pandemic if stay at home orders or no travel advisories remained in place. Day suggested they would consider holding their retreats later in the year, potentially in the fall months rather than in the early summer as they were approved by the planning commission.

Under the terms of the IUP, Day and Logan must meet certain requirements to continue running the business from the property. Those include select hours of seasonal operations, how many people can attend the retreats and obeying property lines with the neighbors. The planning commission supported the IUP on March 11 on a 4-3 vote with these attached restrictions.

After background on this situation and permit request was shared by Nelson, the commissioners discussed the permit and the home business at length.

Commissioner Ginny Storlie said she was too concerned about the coronavirus situation to approve a permit that would encourage tourists to visit Cook County in 2020. Commissioner Dave Mills said he too shares concerns about COVID-19, but he was not certain if it could be grounds to stop a permit from being approved.

Nelson said he spoke with legal authorities on this topic and said the county board has public health as a primary objective, and in this instance denial of permit that could endanger the community through the spread of the virus would be justified.

Commissioner Heidi Doo-Kirk said that denying the permit because it could impact a quiet residential neighborhood is not accurate. There is a very busy and popular short term vacation rental that operates next door to Day’s home and business. With that in mind, and given that only 25 people can attend the retreats for a total of 18 days over the course of a year, Doo-Kirk said the permit should move forward.

After discussion, the commissioners opted to send the permit back to the Cook County Planning Commission for further review. The motion, made by Doo-Kirk, was about sending this back to the planning commission so they can review changing the dates for when the business can operate.

The motion passed on a 3-2 vote, with Board Chair Myron Bursheim and Commissioner Storlie voting against.

Coronavirus Update
Once again, a majority of the meeting Tuesday focused on the county’s plans for the coronavirus pandemic. Emergency Operations Director Mike Keyport requested that the local state of emergency in Cook County be extended by 30 days. This follows a step taken by Minnesota Gov. Tim Walz where announced Monday that he’s extending Minnesota’s peacetime emergency declaration through May 13.

The declaration gives Walz special emergency powers, like issuing the stay home order. In Cook County the declaration of a state of emergency provides a pathway for the county to receive various state and federal funding.

The county passed the extended declaration of a state of emergency by 30 days to May 14 on a unanimous vote.

Highway News
Other news and information from Tuesday’s meeting includes an update from officials with the Minnesota Department of Transportation. On April 2, MnDOT announced that the agency will undertake 188 road and bridge projects statewide during the 2020 season to help maintain the state’s roads and bridges improve safety and support construction jobs across the state.

Two of the projects will be done in Cook County.

Highway 61 will undergo reconstruction from Cutface Creek to Highway 14 through Grand Marais, with much of the work through Grand Marais taking place next summer. There was concern expressed from a majority of the commissioners about a detour on County Road 7 as part of this project, specifically at the intersection of 5th Avenue West.

In Grand Portage, Highway 61 will be resurfaced from Reservation Bay Road to the Canadian border.

MnDOT and local Highway Engineer Krysten Foster also shared updates and information about upcoming projects scheduled for a bridge over the Flute Reed River and a larger project on the Gunflint Trail from Trout Lake Road to Pine Mountain Road.

WTIP’s Joe Friedrichs spoke with Rogers on the News at Noon program April 14 about a number of topics from this week’s meeting. The audio from that conversation is shared below.