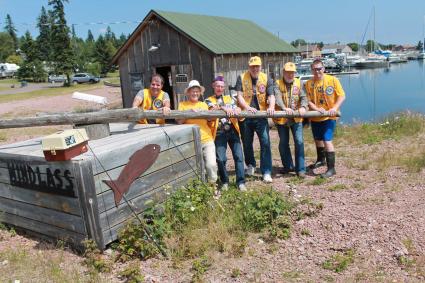 The activities planned for August 1-2 in what was dubbed the “Mini Fisherman’s Picnic” are for the most part canceled.

Fisherman’s Picnic 2020 was canceled back in May because of concerns about the COVID-19 pandemic. However, there were some Lions Club members and community members who wanted something to happen that weekend. Spearheaded by Lion Bob Spry, a group began plans for a smaller event–no log saw contest, loon calling, rock skipping, fish toss or the other traditional events.

Instead, the Lions proposed having music on a small stage in Harbor Park, opening the fishburger stand, setting up a table for a Lions Club 50/50 raffle, and having a fireworks display on Saturday night.

The proposal included setting up a small stage in Harbor Park with a list of musicians performing solo or in duos. The public would have been invited to attend, bringing their own chairs to observe physical distance guidelines and advised to wear masks if near others.

It was thought that fireworks would not be a problem, as that is an outdoor activity with ample space for social distancing around the Grand Marais Harbor.

However, in a Grand Marais Park Board meeting this morning, a motion was passed to deny the permit request for music and fireworks. The motion was made in light of Governor Tim Walz’s executive order limiting the numbers of attendees at events.

In the meeting, Grand Marais Parks and Recreation Manager Dave Tersteeg told the park board and Lion Bob Spry that he had just received an update regarding the number of participants allowed at outdoor events. Tersteeg said it appears events can now allow up to 250 people. However, Spry and the park board members acknowledge that more than that would surely come out for fireworks.

There was some discussion as to whether there is enough spacing around the bay to disregard that directive. However, City Administrator Mike Roth said even if that was determined to be the case, a COVID-19 preparedness plan would have to be in place before fireworks took place. That would include details on how the Lions would manage the crowd. Roth said it was doubtful such a plan could be created by Aug. 1.

The same concerns were raised regarding the music at Harbor Park, although it was acknowledged that it is seldom that there is a crowd of 250 in the park. But again, Roth said a plan would have to be in place.

It was Lion Bob Spry himself who said he could not see all that coming together in time to have fireworks and music. However, he said the Lions would still like to open the Fishburger stand for those two days and set up a small raffle tent.

The park board agreed that the Fishburger stand is like any other food trailer operating in the city and would be required to follow the same masking and physical distance requirements. Administrator Roth said there would still be a requirement for a COVID-19 preparedness plan, but noted that was less wieldy than a plan for fireworks or music.

Likewise, a tent and table for the sale of raffle tickets should be more easily managed. Park Board Chair Sally Berg said the primary concern for that activity would be the use of pens. She said pens should not be reused.

Administrator Roth said the Lions Club could ask for assistance from Cook County Public Health, which has been working with local businesses on their COVID-19 preparedness plans.

After a discussion of how it could work, the park board said it would defer to public health on the logistics of following COVID-19 guidelines. Approval for fireworks and music was not approved, but a motion passed to allow the Lions Club to set up the Fishburger stand and a raffle table, contingent on completion of a COVID-19 preparedness plan.

Bob Spry noted that the July 4th fireworks went off without any problems, but seemed resigned to the park board decision. He said he doesn’t want anyone to get into trouble.

Spry thanked the park board for that advice and said he would reach out to Public Health. However, he added that whether or not the Fishburger stand opens is still up in the air. He said it now comes down to whether there are enough volunteers to staff the stand.

If anyone would like more information about the Fishburger stand, they can contact Bob Spry at 370-0445 or email the Lions Club at gmlionsclub@gmail.com

In related news, the park board rescinded its approval of a snowmobile water skipping event on Saturday, Aug. 1. Parks Manager Tersteeg said the organizer had missed two deadlines to provide insurance information. The park board noted that the water skip event would also need a COVID-19 preparedness plan and it was unlikely the organizer would be able to put that together in such a short timeline. A unanimous motion was passed to rescind the approval granted back in February.

As the meeting ended, Park Board Chair Sally Berg said she hopes that other event organizers are paying attention and realize that COVID-19 preparedness plans will be part of parks use requests for the indefinite future.