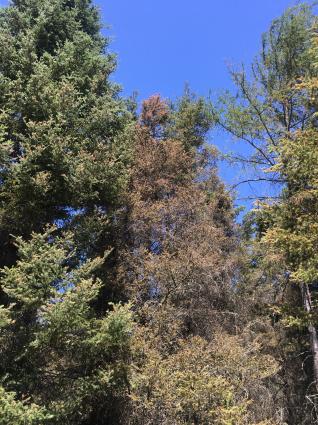 The Greenwood Fire burning in Lake County near Isabella continues to grow at a rate of about 1,000 acres per day, as Forest Service officials report Friday morning the fire is burning at nearly 5,000 acres heading into the weekend.

The fire has led to evacuations of an estimated 90 homes and cabins near Highway 1 and Lake County Highway 2, with 40 residences also under evacuation notice, Lake County Sheriff Carey Johnson said Thursday night during a town hall style event at the Wolf Ridge Environmental Learning Center in Finland.

Throughout the week, consistent afternoon temperatures near 90 degrees, dead balsam impacted by spruce budworm and steady winds from the south continue to fuel the fire’s growth, the Forest Service said Thursday.

The spruce budworm, a native insect and pest in the eyes of many North Shore area residents, continues decimating balsam firs and, to a lesser extent, the region’s spruce. As of August 2021, hundreds of thousands of acres of balsam fir trees have either died or are struggling because of spruce budworm, according to Eric Otto, Minnesota’s northern region forest health specialist for the Department of Natural Resources.

Stands of white spruce and balsam fir in Lake County that were previously killed by spruce budworm are likely impacting the Greenwood Fire’s growth, according to Otto.

WTIP’s Joe Friedrichs spoke with Otto about the Greenwood Fire and what impact spruce budworm are playing when it comes to creating a ‘tinderbox’ in the forests in both Cook and Lake counties. The audio to their conversation is shared below.