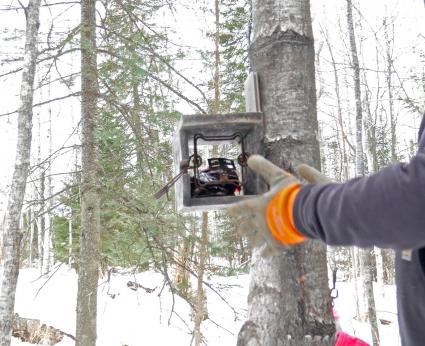 A resident from the Mid-Gunflint Trail area contacted WTIP recently to share the details of an incident about their pet getting caught in the grip of a trap set near Poplar Lake.

Biz Clark spoke with WTIP about an incident involving her dog that took place in early November. According to Clark, she was walking with her dog along a remote Forest Service road that was obvious many others had hiked, biked, hunted, skied, snowmobiled and four-wheeled on recently.

Clark said while they were walking along the road she heard her dog wrestling with something and crying out in pain. She backtracked up the hill to find the dog’s paw caught in a leg hold trap that was set in the grass near the road. Clark said the trap and was invisible to her as she walked by.

Unable to free her dog from the trap, Clark drove to a neighbor’s cabin for help. After an extensive effort, Clark and her neighbors were able to free the canine. Clark took her dog to the vet the next day. A subsequent conversation with two Minnesota Department of Natural Resources conservation officers revealed that her dog was the third such case to have been caught in a leg hold trap that week, according to Clark.

While talking with WTIP, Clark said she is not anti-trapping, but rather pro-safety for “two and four pawed hikers.”

John Erb is the DNR’s furbearer research specialist. He spoke with WTIP’s Joe Friedrichs about Clark’s situation and others similar to it both in 2020 and historically. The audio shared below is their conversation from Thanksgiving week as winter settled in across northeastern Minnesota and as the trapping season enters its peak.

To learn more about trapping in Minnesota, click here.

WTIP has reported about the history and current situation for trapping in Cook County and throughout the North Shore area. Learn more here.