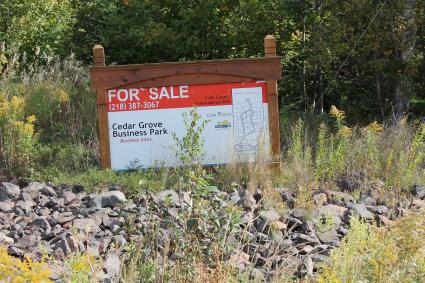 It seems that zoning in some form or another comes up at every meeting of the Grand Marais City Council. At the Tuesday, September 9, council meeting a request for a zoning ordinance change within the Cedar Grove Business Park was discussed.

The need for the change came up because of a purchase offer to the EDA for a business park lot from Brad Shannon with the nonprofit organization NorthPoint. Shannon would like to create a youth center on a lot abutting the Gunflint Trail. He is looking at a small lot to the west of the Como Oil and Propane lot.

After an offer and counteroffer, an agreement was made for Shannon to purchase the lot in question for $25,000, including closing costs.

Somnis said the ordinance change was being requested to align the city’s ordinance with the business park covenants, which would then allow Shannon to proceed with the proposed teen facility under the services moniker.

Grand Marais City Administrator Mike Roth noted that the lots have been sitting vacant at the Cedar Grove Business Park for a long time. He suggested that the city would benefit from a lot sale to any entity, nonprofit, or not.

“If we do sell this property, irrespective of whether they pay property taxes, the sale will support the bond that was used to pay for the construction of the water and sewer. The use of the water and sewer then will be paid with rates. There could potentially be employment that’s created as well.

“So it seems to me, even if we’re concerned about this being supported with public dollars, that it being sold for actual cash, then developed and used by anyone is a better situation than not being sold and the EDA continuing to own it, and continuing to pay the special assessment for the water and sewer with city and county property taxes,” said Roth.

Councilor Tim Kennedy serves on the Grand Marais Planning Commission, which recommended approving the change. Kennedy noted that the ordinance change would better match the existing conditions at the business park, which includes mainly businesses that offer some sort of service, not any manufacturing.

Kennedy talked a little bit about the original plans for the park and noted that many local businesses, such as road contractors, heavy equipment companies, etc., reserved lots for equipment storage and warehouses.

However, that did not happen, said Kennedy, adding, “And then the economic decline happened and pretty much none of those businesses ended up performing on their reservation agreements and unfortunately, the park had gone ahead and made decisions and here we are today.”

Kennedy said, “We all know the struggles that we’ve had over the years to try to get occupancy in the park and you know, we have some good businesses in there paying taxes. They’re providing services there, you know, employing people, it’s beginning to work”

In addition, Kennedy noted most of those existing businesses are “service-type activities.”

Kennedy noted that Shannon hopes to move ahead with his lot purchase but deferred to his colleagues and agreed to wait to review more information on the history and the use of the business park. As far as the EDA vision for the business park, Somnis said yes, the hope is that the park will fill with commercial enterprises.

Somnis noted that during the discussion a couple of people mentioned the vision of the EDA and what sort of businesses are wanted there. She said, “What we want in the business park is people that have some kind of commercial use. You know, we’re not out looking for nonprofits, that isn’t a vision. It’s a response to the inquiries that are coming in.”

Somnis said the EDA would continue to work toward the goal of more commercial establishments in the business park and talked a little bit about the inquiries that she had had recently.

Somnis agreed to provide a map of the business park as well as the covenants for the councilors and return to a future meeting. The council will consider the request again at their next council meeting,

Listen to this report on news from the city of Grand Marais with WTIP reporter Rhonda Silence.