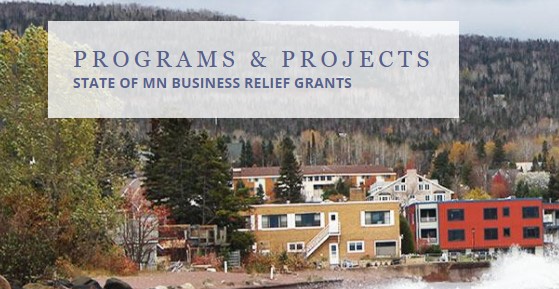 In 2020, in response to requests from potential buyers, the Cook County/Grand Marais Economic Development Authority began working to allow “accessory residential use” in the Cedar Grove Business Park in Grand Marais. The EDA had heard from business owners who wanted to start a business or grow an existing business of the difficulty of finding housing—and a place for a business. The solution? Offering that accessory residential use. However, making that happen turned out to be complicated and is still on hold, pending approval of zoning ordinance changes from the Grand Marais City Council.

In July 2021, the Cook County/Grand Marais Economic Development Authority succeeded in getting legislation passed that changed the language that not only established the Cedar Grove Business Park, but other business/industrial parks around the state of Minnesota. The language allows the entities managing business parks to change the more stringent rules of commercial/industrial use only to other uses. This legislation passed in hopes that vacant business parks could be more creative about getting lots sold and on the tax rolls.

Before the new state language can be applied however, there must also be changes to the zoning ordinance of the city of Grand Marais. The EDA presented its plan to the Grand Marais Planning Commission on December 8, 2021 and received unanimous approval.

The planning commission recommendation came before the city council on January 26 and was met with a number of concerns. Councilors asked about the potential for residential units to be used for vacation rentals without stronger language preventing that use. The council raised concerns about pedestrian safety without sidewalks and street lights. There was concern about families living near propane tanks and boat storage and about conflict with truck traffic.

EDA Executive Director Beth Drost was at the city council meeting and noted the concerns. At the February 9 EDA meeting, Drost shared the city’s concerns with her board.

Drost said she will work on language that would better address those concerns. She will bring it back to the next EDA meeting. EDA Board Members Carol Mork and Ann Sullivan volunteered to assist as needed.

The EDA board agreed that obtaining this ordinance change is time-critical, as there are Cedar Grove Business Park lot sales that are contingent on this language change.

WTIP’s Rhonda Silence spoke with EDA Director Drost about the efforts to make this ordinance change, as well as other matters at Cedar Grove Business Park. The two also spoke about the need for a new EDA board member to replace Virginia Detrick Palmer who resigned in January and about the work of the Cook County Early Childhood Coalition.

The next EDA meeting is Tuesday, March 8 at 4:00 p.m. in the Cook County Commissioner’s Room.