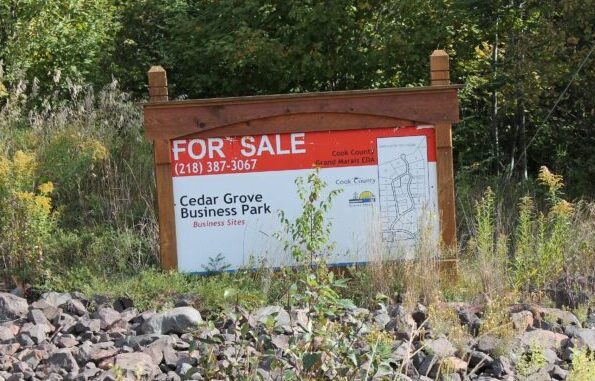 During the meeting, the EDA approved the sale of Lot 9 Block 5 to Ron Piercy of RP Sterling, LLC.

“The numbers are dwindling,” said Beth Drost, executive director of Cook County/Grand Marais EDA. She added, “The lots are getting a bit more specialized in what they can be bought for.”

In addition to the six remaining lots, Drost explained that three lots are listed as pending or contingent. They are Block 7 Lots 5 and 6 and Block 5 Lot 11.

The three lots are awaiting approval of a zoning change from the City Council. The EDA requests the lots be re-zoned to allow employee-occupied residences on the property.

Drost said, “The zoning has gotten in front of the city council once before, and they sent it back to us. And so we’re hoping to bring it back in.”

In addition to the update on the Cedar Grove Business Park, the EDA discussed the initial results of the comprehensive housing study. The EDA hired Grant Martin of LOCi Consulting to conduct a market analysis to assess the current demand for housing in Cook County.

Drost said that the housing study gave the EDA insight into the current demand for housing and how many homes in Cook County are seasonal properties.

“There are about 2900 seasonal properties in the county,” Drost said. She added, “We know things like 46% of homes in Cook County are owned free and clear, and there are no mortgages on the property.”

The housing study also outlined that the median sale price for homes sold in Grand Marais was $322,500, an increase of about 47% from 2017.

Another statistic from the housing study showed that between 2017 and 2021, Cook County issued building permits for an average of 54.2 units each year. About 60% of building permits per year are for structures located on a lake.

Drost said the EDA would be finalizing the housing study in the coming weeks and be made available to the public afterward.

In other EDA news, Drost provided an update on the Superior National Golf Course. Drost said that superintendent Mike Davies is retiring this year, and his son will be taking over operations on July 1.

Even with the late snow and spring precipitation, the golf course is experiencing an average year. Commissioner Scott Harrison said during the June 14 meeting that the golf course has had a good start to the season, but there is still room to improve.

WTIP’s Kalli Hawkins spoke with Beth Drost, executive director of the Cook County/Grand Marais EDA. Audio from the interview below.