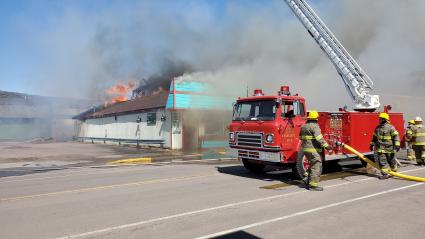 There are many questions surrounding the devastating fire that roared to life in downtown Grand Marais destroying three structures on Monday, April 13. Community members have been awaiting news from the State Fire Marshal’s Office. The wait will continue for the exact cause of the fire, however, according to Grand Marais Fire Chief Ben Silence, arson has been ruled out.

Fire Chief Silence said it will take more time for an official ruling from the Fire Marshal’s Office on the cause of the fire.

Silence added that unfortunately, it will take some time before clean-up of the fire scene will begin.

Silence said, “I think I can speak for the city when I say, we realize it is an eyesore. But due to the complexity of the incident and the number of businesses—and insurance companies—involved, it will be awhile before cleanup can begin.”

Silence added a reminder to the public to stay away from the remains of the buildings. City maintenance crews have placed fencing around the area. Silence said it is not safe to enter the area. In addition, any unauthorized entry could result in charges of trespass.

Flames were first seen at the Crooked Spoon Café on Wisconsin Street and when the Grand Marais Fire Department arrived on scene, the upper level of the café was fully engulfed in flames. Visit the WTIP Facebook page for photos and video of the fire scene.

Maple Hill, Colvill and Lutsen Fire Departments also responded, but despite the efforts of the four fire departments with multiple fire engines, the fire quickly destroyed the buildings.

Firefighters focused on keeping the fire from spreading to Sven & Ole’s Pizza and other buildings in the area. The fire was brought under control at about 5 p.m., but firefighters monitored the fire for much longer and were called back during the night.

No injuries have been reported, either at the start of the fire, or of any personnel fighting the fire. See a related story, an interview with Grand Marais Fire Chief Ben Silence, here.

Since the fire, community members have set up methods for the public to show support for the businesses. Community member Tina Hegg Raway shared the following with WTIP.

A GoFundMe account has been set up for all three businesses destroyed by fire, Picnic & Pine, The Crooked Spoon Cafe and White Pine North. If you are able to donate, and feel called to do so, your donation will be split equally between the three businesses.