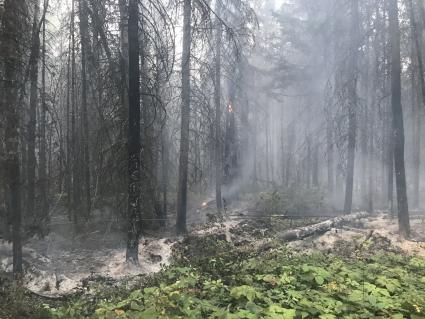 U.S. Forest Service officials have warned home and cabin owners near the Greenwood Fire in Lake County that the winds could shift this weekend, putting their properties in danger.

Throughout the week, consistent afternoon temperatures near 90 degrees, standing dead trees and steady winds from the south continued to fuel the fire’s growth.

A cold front expected to settle in the region Friday night and into Saturday could shift the winds out of the west, moving the fire east. The fire has led to evacuations of an estimated 90 homes and cabins near Highway 1 and Lake County Highway 2, with 40 residences also under evacuation notice, Lake County Sheriff Carey Johnson said Thursday night.

Among those who were notified in recent days about ongoing threats from the Greenwood Fire is Byron Boler, a co-owner of Snowshoe Country Lodge.

Boler spoke with WTIP’s Joe Friedrichs Aug. 20 about the wildfire that started about a ¼ mile from the lodge and continues to threaten the property near Sand Lake. The audio to their conversation is shared below.

The Associated Press contributed to this report