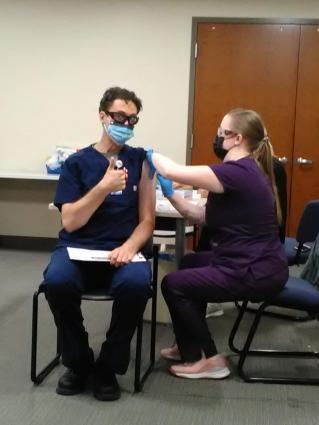 Following up with local RN after second COVID-19 vaccination

Vaccinations against the COVID-19 virus continue across the United States, the state, and locally here at North Shore Health.
The first healthcare workers at our local medical facility received their vaccinations on Tuesday, December 22. Among the medical staff was RN Rob Wells of Grand Marais, who spoke to us when he got off work that day.

Wells agreed to give a report to WTIP after he received his second COVID-19 vaccination on January 12. We caught up with Wells the day after he received that second dose–and after a nine-hour shift at North Shore Health–to see how he was feeling. Wells said he was pleased to share that although some vaccine recipients had some side effects from the shot, he had none other than arm pain for a short time.

Wells acknowledges that not everyone is that lucky, there have been reports of fever, chills, body aches, and some stomach upset. But, as Wells said in our one-week-after vaccination interview, none of that is as bad as acquiring COVID-19.

Here’s WTIP’s Rhonda Silence with a report from RN Rob Wells on getting the second COVID-19 vaccine.