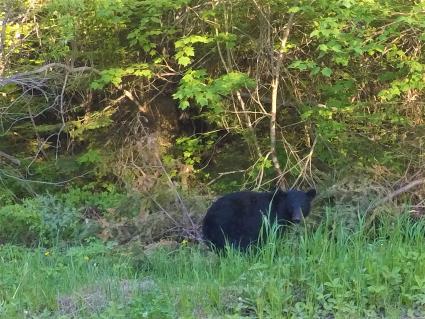 If implemented, the order would aim to reduce the likelihood of negative encounters between BWCA visitors and bears, according to Superior National Forest spokesperson Joanna Gilkeson.

The Forest Service enacted a food storage order for a collection of lakes at the end of the Gunflint Trail in 2020 due to bear activity.

WTIP was informed in recent weeks of multiple incidents involving canoe campers and bears in the BWCA. During one incident from July 15 on Duncan Lake in the Middle Gunflint Trail area, four bears aggressively pursued a hanging food pack at a campsite. According to reports, the bears, a sow, yearling and two cubs, would not flee even when whistles were blown and pots and pans were banged together. Additional reports of bear encounters surfaced days later on nearby Rose Lake.

In addition, conservation officers with the Minnesota Department of Natural Resources and law enforcement with the Forest Service recently reported that some visitors said bears were being a nuisance in the wilderness, including one incident in the BWCA where a bear took a pack containing a firearm.

When it comes to being ‘bear aware’ in the BWCA, the advice essentially comes down to keeping a clean campsite, Gilkeson said. Food, toiletries, and waste should be hung out of reach or stored in a bear-proof container when not in use, she added. Click here to see how to properly hang food in the BWCA, and here for a list of bear-resistant containers for backcountry travel.

WTIP’s Joe Friedrichs spoke with Gilkeson about what comes next for the Forest Service as bear and human conflicts occur this summer. The audio to their conversation is shared below.