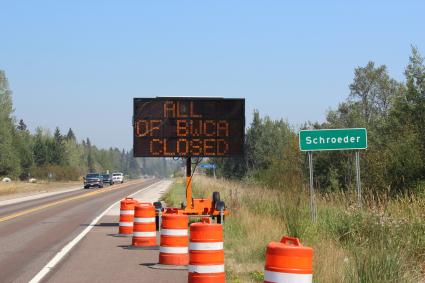 Forest Service says BWCA will be closed until ‘weather changes’

Superior National Forest Supervisor Connie Cummins says she felt a sense of physical pain when she saw a sign on Highway 61 informing people to the news that the Boundary Waters Canoe Area Wilderness is closed.

“When I drove up here today and saw the sign that says Boundary Waters closed, it was in big lights, I felt like a little a punch in the stomach,” Cummins told a crowd gathered Aug. 22 at the Mid-Gunflint Trail Fire Hall, also known as the Schaap Community Center.

The U.S. Forest Service hosted a town hall style meeting to share updates and information about active wildfires in the region and the complete closure of the BWCA. The closure went into effect Saturday, Aug. 21.

More than 100 people turned up for the event on the Gunflint Trail to learn about fires in the BWCA and the closure. Questions and topics discussed ranged from evacuation protocols on the Gunflint Trail to how long the closure of the BWCA could last. Cummins said the closure order will be reviewed consistently, and weekly determinations will be shared publicly. The current closure is in effect until at least Friday, Aug. 27. Cummins noted that weather and precipitation will be key factors in any decisions to reopen the wilderness, while mentioning that it could be until the ‘snow flies’ before the BWCA reopens to public access.

Tofte District Ranger Ellen Bogardus-Szymaniak says the decision to close the wilderness was very difficult, noting that anyone who does violate the closure order could face a $5,000 fine and potentially prison time.

Other topics discussed during the meeting focused on evacuation plans for the Gunflint Trail community should a wildfire spread outside the wilderness. Patty Johnson is the fire management officer for the Gunflint Trail and Tofte Districts. Johnson says based on current models and projections the Forest Service uses to predict fire behavior, there is a “less than .01 percent chance” of any of the fires currently burning on Superior National Forest reaching the Gunflint Trail.

Regarding specific fire activity on Superior National Forest, activity increased Monday afternoon on the Greenwood Fire due to warmer temperatures, lower humidity and gusty winds. Growth over the weekend took place on the northwest finger and west flank of the fire, according to the Forest Service. That being the case, the fire’s size remained at 8,862 acres due to firefighting efforts and improved mapping of the fire footprint. Contract loggers were engaged to create shaded fuel breaks at key areas on the fire to start the new week.

For fires located in the BWCA, both the Whelp Fire and John Ek Fire did not grow substantially, if at all, on Sunday due to favorable conditions. There was some precipitation Sunday night in the BWCA, though conditions Monday included warmer temperatures and strong winds.

The John Ek Fire is 2.5 miles south of Little Saganaga Lake and extends from John Ek Lake to the southeast corner of Elton Lake. It was about 800 acres as of Monday afternoon.

The Whelp Fire is located about five miles northwest of Sawbill Lake, and continues to creep and smolder in the deep duff without moving outside of its current footprint of an estimated 50 acres, according to the Forest Service.

The file below includes audio recorded by WTIP during the Aug. 22 meeting on the Gunflint Trail.