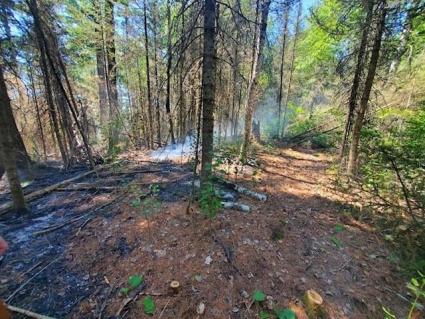 A campfire ban remains in place inside the Boundary Waters Canoe Area Wilderness and at dispersed campsites across Superior National Forest.

The ban was first enacted late Friday afternoon on July 9. It will remain in effect until the Forest Service lifts the ban as dry conditions continue to plague the region.

Meanwhile, one of the fires burning in the BWCA has grown to more than 60 acres in size over the weekend.

The Delta Lake Fire, located about 20 miles east of Ely, was caused by lightning strikes and first detected last week on Wednesday, according to the United States Forest Service.

The fire is burning in an area thick with fallen trees from blowdown storms, making access to the fire unsafe and difficult, according to a news release from the Minnesota Incident Command System.

At least two BWCA entry points on the Kekekabic Trail are both closed. Several lakes, campsites and portages are also closed. Visit the Superior National Forest website for a complete list of closures and to learn more about the ongoing campfire ban.

In related news, some members of the paddling community and others interested in news from in and around the BWCA are expressing concern about the Forest Service’s decision to fight the fire inside the wilderness. Fire has long been used as a tool to create healthy forests in the Boundary Waters region, and some fires inside the wilderness are allowed to burn naturally, particularly those started by lightning strikes.

“While allowing wildfires to play their natural role in wilderness is an important consideration, safety of the public and fire personnel is the top priority for the Forest in managing naturally occurring wildfires. Many factors go into the decision-making process including weather, drought, and proximity to people and structures. The Forest is actively suppressing these current wildfires due to the proximity to heavily used recreation areas, roads, trails, structures, limited resources both locally and nationally, continued forecasted drought conditions, and locations having minimal nearby natural features to contain them.”

With no precipitation in the forecast for Monday or early Tuesday, conditions will become drier to start the week across Superior National Forest, including the BWCA.

WTIP’s Joe Friedrichs spoke with Superior National Forest spokesperson Joanna Gilkeson about the campfire restrictions currently in place and the active fires inside the wilderness.