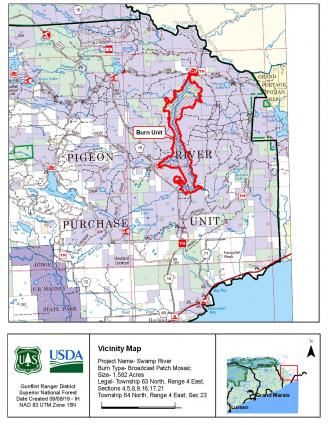 The US Forest Service will be conducting two prescribed burns, on the east and west ends of the county, starting now and taking place until the end of May.

The smaller of the prescribed burn is near Baker Lake off of The Grade in the Tofte Ranger District. Fire Management Officer Patty Johnson said that fire will not create a lot of smoke and is unlikely to impact any forest users in the area.

However, Johnson said the “Swamp River Prescribed Burn” in the Hovland area is much larger and will be noticeable.

The Swamp River Prescribed Burn is approximately six miles north of Hovland, in the vicinity of Otter Lake Road, Jackson Lake Road, and the Arrowhead Trail. The prescribed burn area is 1,582 acres.

The Forest Service explains that the purpose of this project is to enhance wildlife habitat by creating a “patch mosaic pattern of burned and unburned pockets within the Swamp River wetland corridor.”

The Forest Service explains that by burning older, less productive shrubs, the site will provide more nutritious vegetation for moose and other wildlife. The Forest Service also believes the burning will stimulate new growth of grasses, shrubs, sedges, etc. that will benefit nesting and foraging for species such as the ring-necked duck, American woodcock, leopard frog, black bear, and others.

Smoke will be visible, but no road closures in the area are expected.

For Cook County residents and visitors, burning is not allowed at this time. The Minnesota Department of Natural Resources rates fire danger in Cook County as “Very High,” which means fires start easily and spread at a very fast rate.

There is no restriction on campfires at this time, but no burn permits are being issued. Property owners are asked to hold off burning any yard debris.

Although campfires are allowed, campers and day-use visitors to state and national forests on the North Shore should be extra vigilant when building and extinguishing campfires.

There was some alarm in the Gunflint Trail community on Sunday, May 16, when a fog of smoke settled on Gunflint Lake. WTIP contacted the US Forest Service which said the fire was likely from the prescribed burn being conducted in the Tofte area. The burn totaled 71 acres.

There are also wildfire starts north of us in Ontario. According to Ontario’s Ministry of Natural Resources and Forestry fire danger is high to extreme in southern parts of the region, including in the Thunder Bay area.

The largest fire in the Northwest named Fort Frances 5, is located just south of Sturgeon Falls First Nation. First reported May 12, it stood at 144 hectares (about 355 acres) on Sunday. May 16 and was listed as “being held” by the Ministry of Natural Resources.
Several smaller fires have been also been reported in Ontario and are considered under control.

Details on current fire conditions and current burning restrictions can be found on the Minnesota DNR website.