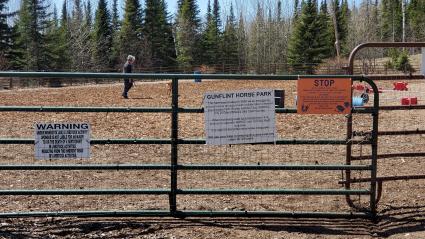 Go Dog North Shore is a local nonprofit that works to see happy and healthy dogs here in our area. The organization has hosted skijor events, participated in parades, and shares dog care information. And for many years, Go Dog North Shore has worked to develop an off-leash, safe exercise area for dogs.

Since 2013, local dog owners have been allowed to use the Sawtooth Saddle Club horse arena off the Creechville Road as a dog park. Although many people have enjoyed having a space to let their dogs run without worries about traffic, predators or traps, it isn’t an ideal situation for either user group.

The Cook County Community Center board, which manages the horse arena, recently gave Go Dog North Shore notice that this shared use was coming to an end in November 2021.

The arrangement was meant to be temporary from the beginning as the city of Grand Marais and Cook County considered the creation of a dedicated area for a dog park in the Sawtooth Bluff Master Plan. In that master plan, the Cook County Parks & Trails Commission earmarked an approximately 2-acre area for a dog park. In the plan, the corner lot at 5th Avenue and the Gunflint Trail, almost directly across 5th Avenue from the horse arena, was selected as a site for a dog park. See the map showing ownership of the proposed dog park area here.

There has been no action on the Sawtooth Bluff Master Plan, which includes trails throughout the area, an educational area, possibly with an outdoor amphitheater, a camping area, and more on city- and county-owned land. The plan can be seen here.

Although the city and county have not moved ahead with any elements of the plan, Go Dog North Shore has been asking them to do so, as the dog park location could be done with minimal impact to the rest of the master plan. In fact, according to Go Dog North Shore member Cathy Quinn, at this time the dog group would only develop one acre for use as a dog park.

Development would be minimal, as trees are desired for share for dog park users. The primary work to be done would be to do some clearing and to safely fence the area. Go Dog North Shore is not asking for funding for the development. They are committed to raising funds that would be needed.
Go Dog North Shore will be presenting this information and asking for authorization to move ahead with creation of the dog park at the city council meeting on Wednesday, May 12. The meeting starts at 6:30 p.m. It will be held via Zoom and live-streamed on the city’s YouTube channel. For information on taking part, contact Grand Marais City Hall at 218-387-1848 or email citycommunications@boreal.org.

WTIP’s Rhonda Silence spoke with Cathy Quinn, one of the organizers of the Go Dog North Shore group about all of the efforts to develop a dog park here in Grand Marais. Here’s their conversation. 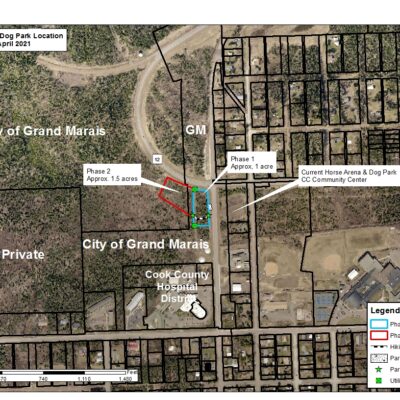 In the Go Dog North Shore information for the city is this map showing ownership of the proposed dog park. Image by GDNS 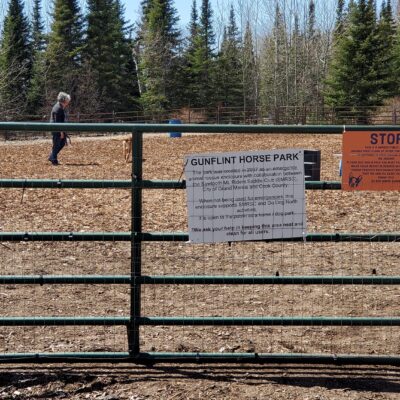