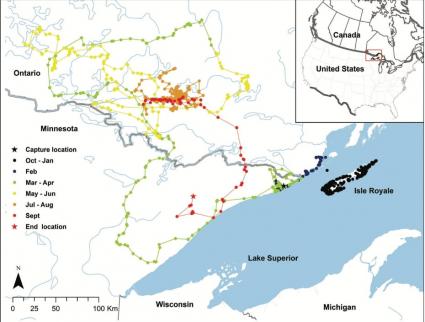 After a Minnesota wolf crossed an ice bridge on Lake Superior in 2019 separating Isle Royale from the mainland, wildlife researchers continued to follow the animal’s movements around the region.

And what a journey it’s been.

The female wolf was relocated from the Grand Portage Band of Lake Superior Chippewa Reservation in fall 2018. The wolf was one of four moved from Grand Portage in an effort to restore the species to Isle Royale, where a predator is needed to prevent moose overpopulation, according to park officials. The National Park Service planned to move 20 to 30 wolves to Isle Royale over the course of several years.

Beth Orning is a research scientist who worked on an Isle Royale project as part of the Global Wildlife Conservation Center’s ongoing research on the island. She is also the lead author of a research paper that was recently published about the wolf’s journey back to the mainland from Isle Royale.

Orning spoke with WTIP’s Joe Friedrichs about the wolf’s movements since it returned to the mainland Jan. 31, 2019. Orning said wildlife researchers have been using a GPS tracking collar to study where the wolf – known in the scientific community as W003F – has traveled during the past two years. Now settled in the Thunder Bay area, the wolf went as far as Voyageurs National Park and along Highway 61 up Minnesota’s North Shore.

The audio below is Orning’s full WTIP interview.