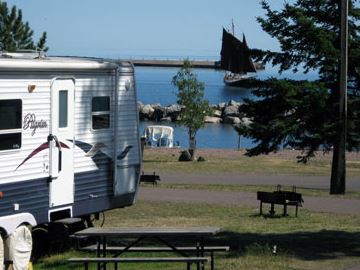 Like so many other businesses and organizations, the Grand Marais Recreation Park campground has been in a holding pattern, awaiting word from Governor Tim Walz regarding when the campground can be opened to visitors. The Grand Marais campground is different than many in the region, in that it offers seasonal rentals. Campers come for the entire summer, staying in their own, self-contained RV.

For that reason, the Grand Marais Campground had already heard from the State of Minnesota that it could open to those seasonal campers soon.

However, it is unlikely that overnight tent camping will be allowed until much later this summer. That will have significant financial implications for the municipal campground—and the city, which relies on campground revenue to fund various projects.

Before the campground is opened to overnight campers, there is work to be done. Grand Marais Parks Manager Dave Tersteeg said there will be changes at the campground to remind visitors of the physical distance requirements.