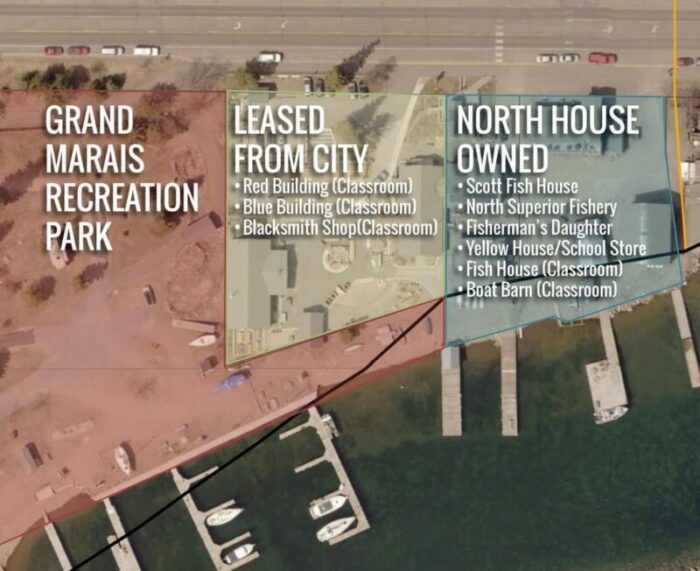 The Grand Marais City Council resumed discussions with the North House Folk School during the August 31 meeting regarding the proposed sale of the leased city-owned property.

The property being discussed is leased 25 years at a time by North House, with six years remaining on the current lease. North House Folk School Director Greg Wright said the property is central to North House’s operations, which include three structures used for classroom instruction, public events, and other campus needs.

Prior to the August 31 city council meeting, North House Folk School sent a letter to the Grand Marais City Council. The letter reaffirmed their commitment to work with the city to find a long-term partnership solution. In addition, the North House defined feedback from the community, a willingness to update the current lease, and strategic planning for the future.

Wright said in the letter, “North House awaits the city’s direction regarding a work session or other next steps looking forward. Recognizing upcoming elections and the urgency of the priorities we need to engage, we ask for negotiations to move forward within the next 45 days.”

The letter also stated that the North House is committed to having a strong and positive presence in Grand Marais and Cook County. “We are ready and willing to move forward together.”

Grand Marais Mayor Jay DeCoux, who previously cited a conflict of interest on this topic due to his involvement with North House, was not in attendance for the August 31 discussion.

Each council member voiced their concerns and reiterated feedback they had received from the community on the matter. All of which led to their decision to maintain possession of the leased parcel.

After sharing his reasoning and opinion of the proposed sale, Moody said, “I feel like finding a way and a path forward with North House through a revision of the lease would allow them to do the things that the community says they want to see done.”

“I think it’s just that this is a very simple thing that we need to have a dialogue and a discussion,” said Schulte.

Garry said that while he was initially open to the idea of selling the leased city-owned parcel, his viewpoint changed after the closed session discussion. “I was pretty convinced of the importance of maintaining possession of that land by the city.”

“I feel like we can get to a place where we can get to a better, you know, a better lease agreement that works for everybody. I think it’ll be in negotiation. It will take some time,” said Garry.

Benson reiterated shared viewpoints from the other council members. In addition, she touched on the value of the city-owned property to the public, concerns over growing traffic congestion on Highway 61, property taxes, current North House nonprofit operations, and a handful of other topics.

“The city has a priority to the lake and the harbor for everyone,” Benson said. “It needs to stay visible, and it needs to be accessible for everyone.”

Audio from the August 31 city council discussion regarding the North House Folk School is below.

City City Council will not sell campus property to North House Folk School Read More
©2022 WTIP | Website Design & Development by W.A. Fisher Interactive. Report Problems.
We use cookies to offer you a better experience, analyze site traffic, and serve targeted advertisements. By continuing to use this website, you consent to the use of cookies in accordance with our privacy policy. X