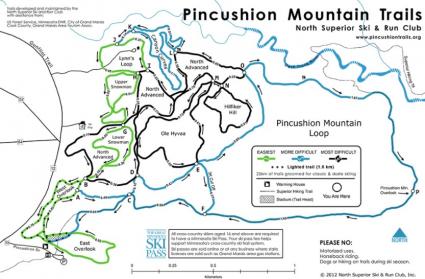 When WTIP reporter Rhonda Silence checked in with Grand Marais Mayor Jay Arrowsmith DeCoux for an update on city activities, she heard some disturbing news not related to the city, but instead to the wildlife that surrounds it. On January 15, Jay told WTIP that he had just left a local veterinarian’s office with his dog, Blue, who had just survived an encounter with several wolves at the Pincushion Mountain Ski Area.

Jay said he and Blue, a Weimaraner, were snowshoeing at the popular trail area, about three miles from the Pincushion Trailhead when the incident happened. Blue had run ahead of him and Jay said he heard his dog “screaming bloody murder.”

Jay caught up with Blue and ran into the woods toward her, screaming himself. He was able to scare off the wolves. Blue ran one way and the wolves another and fortunately Blue made her way back to Jay.

She was injured, but able to keep moving. She suffered a bite wound on a leg and a puncture wound on her neck. She is now recovering at home.

Jay Arrowsmith DeCoux agreed to share the story, not to raise alarm, but to advise caution when enjoying our forested area. He said, “We’re all in the same spot and we have to be aware of it.”
Here’s more on the incident.