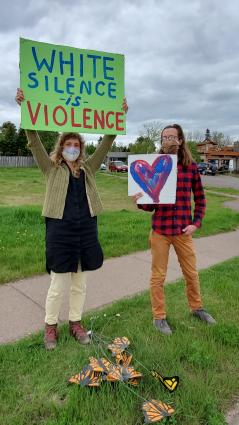 A late afternoon call went out on social media in Cook County on Friday, calling for a “pop-up rally” to ask for justice for George Floyd, who died while in police custody. At the time of the rally there had been no arrest and the streets of Minneapolis were filled with protests and violent acts.

Community members who felt they needed to do something were asked to come to downtown Grand Marais, near Java Moose coffee shop, to quietly protest the unjust treatment—and death—of George Floyd.

The social media call suggested that people gather from 5 p.m. to 5:30 p.m. People began lining Highway 61 before 5 p.m. and by 5:30, about 100 people stood along the roadway, bearing signs calling for systemic change and an end to racism.

At 5:30, there was no sign of the crowd dissipating, as people stood solemnly with their signs, or chatted quietly. A few musicians sang and played music.

Many cars passing on Highway 61 honked or gave thumbs up or flashed peace signs to show solidarity with the rally participants.

Click on the slideshow to see some of the activity on May 29.

To see a video at the start of the “Justice for George Floyd” rally, click here.

To see a video at 6 p.m., when the rally was set to end–but continued–click here.