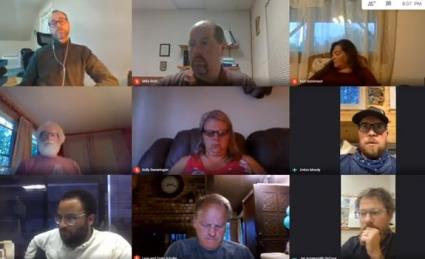 The city of Grand Marais met Wednesday, July 8, remotely as it has been during the COVID-19 pandemic. On the agenda was consideration of the zoning ordinance changes approved by the Grand Marais Planning Commission, intending to make it easier for developers to build housing in the city. If passed, there would be changes on lot sizes, setbacks and for accessory dwellings — additional housing structures on city lots. The ordinance, with possible changes can be viewed on the city’s website here.

The consultant hired by the city to help with these efforts, Jeff Miller of HKGi was on hand at the July 8 meeting to answer questions. The city council noted that HKGi had conducted a number of meetings with the public in Grand Marais, including focus groups with some of the stakeholders such as people looking for housing. However after discussion, it was agreed that not everyone may be aware of the potential changes that could change the look and feel of the city’s residential district.

The council also noted that many Grand Marais citizens seem to be okay with the potential changes, as many single-family homes built in Grand Marais in recent years fit the criteria in the proposed ordinance. Those homes were allowed after the homeowner came to Grand Marais Planning and Zoning and received variances.

Members of the Planning Commission point out that the ordinance changes would bring the regulations in line with what really exists and what would meet the city’s vision to help develop more housing.

Learn more about the planning commission’s work in this video.

More on masks
Another matter considered was the Cook County Chamber for a resolution requiring the wearing of masks or face coverings in the city. City Councilors and Mayor Jay Arrowsmith DeCoux noted that the city had already made a statement encouraging the wearing of masks in the city. After discussion, the council agreed to send a letter to Minnesota Governor Tim Walz’s office, asking for statewide guidance on this. Hear some of the council’s discussion in this report.
Miscellaneous other matters
And finally, the council covered some interesting city business in the end of the meeting council reports. The council discussed a request for part of a city street from the Gunflint Tavern; about the need for more trashcans downtown and once again, seagulls.
WTIP’s Rhonda Silence spoke with Mayor Jay Arrowsmith DeCoux about all of this. Here’s their conversation.